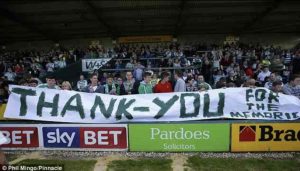 On Saturday 3rd of May 2014, Yeovil Town’s single-season stay in the 2nd tier of English football finally came to an end with a 4-1 loss at home to Middlesbrough.

Nearly 6500 fans were inside Huish Park to see Gary Johnson’s side bow out of the Championship.

‘Boro took the lead through Danny Graham on the half hour mark, but, despite a James Hayter equaliser, the Teesiders proved too strong on the day.

Emmanuel Ledesma scored either side of the break, with Lee Tomlin also getting in on the act.

The game marked an immediate return to League One after just one season in the Championship.

After the final whistle the Glovers also handed out the end of season awards.