Albi Skendi has signed for Orange County Soccer Club in California almost a year since his last appearance for Yeovil Town.

The USL Championship side described Skendi as a defender and a ‘former’ Yeovil Town player with the Glovers confirming his departure on Friday evening.

Skendi had been AWOL from Huish Park since the summer when it appears he had a difference of opinion over whether an option on his Yeovil contract was triggered or not.

Speaking to his new club’s official website, Albi said: “I cannot wait to start the season. I get to play for the best team in the league and now live in the most beautiful county in America.” 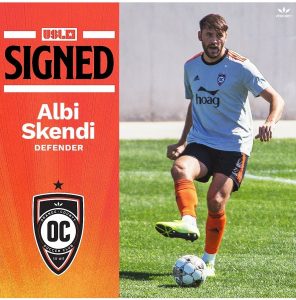 Orange County are managed by Richard Chaplow, a former Southampton and Burnley midfielder, who said: “We are happy to have Albi on board.

“He is the right fit for our locker room and brings with him good leadership skills from his time playing in England.

“Albi is a powerful and mobile player that has the flexibility to play in both the defense and midfield, he will be a big part of what we do this season.“

Also on the roster (as they call it) in Irvine, California is Rob Kiernan, an Irish defender who made three appearances for Yeovil on loan from Watford in the 2010-11 season.

Skendi played 75 times for the Glovers, scoring 9 goals and won the National League Player of the Month award in January 2021.

He was pictured playing club football with Justin Bieber and spoke exclusively to the Gloverscast in September about his decision not to return to Somerset.

All the best in California, Albi.