Skendi: “Everyone at the club knew my decision”

When we speak to Albi Skendi, on a late summer’s evening in August, Yeovil Town are a day or two away from kicking off their National League campaign against Kings Lynn Town.

Sat in his car, in sunny Los Angeles with palm trees in the background, Albi tells the Gloverscast why he’s not about to line up at Huish Park, and why that’s been the plan for a while.

“I lived in America prior to coming out to England to play and by then I got my citizenship and that goes on for four or five years until you are granted permanent citizenship.

“Having done my two years at Yeovil, I had to make a decision whether to be out in America and finalise my Green Card which was coming up to its expiry date and I had to be there to file the process for renewing my citizenship.”

“I had to make a decision to stay out here or go back to England to play, that is the be all and end all.

“Everyone at the club knew my decision. Everyone knew I wanted to go back to America at a certain point and I only wanted to be in England for a certain amount of time to play.

“I thought my contract was a two-year contract, so at the end of two years my plan was to go back to America and then I found out there was an option,” Albi explains. 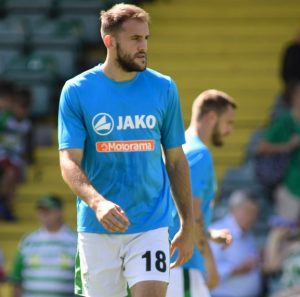 When he was not spotted at pre-season training at Huish Park, speculation began that he would not return which manager Darren Sarll and chairman Scott Priestnall confirmed.

Priestnall said: “To avoid conjecture and rumour, we can confirm that Albi Skendi is currently absent from Yeovil Town training.

“However, Skendi does remain under contract with the football club.”

Skendi explained that he believed the option was mutual and that it needed to be agreed by both him and the club.

He said: “They said ‘we understand, we know you have been doing this process for years now’.

“Then as the weeks went by I was not hearing anything and then as the season came to an end my contract got extended with no discussion.

“In my view it was an option, it had to be agreed mutually by us both. That is what I thought was going to happen, but it didn’t.

“I was even up for paying out my own contract so I could leave because I just wanted to be out here (in America).

The perception could be that Skendi is on the lookout for a move, but the humble utility-man has clearly got his roots in America that he wants to commit to.

“In life you have to make decisions and this is my decision, I have family and ties out here and I cannot just leave.

“I had to pick one or the other and I feel like America is the one, I have invested so much after being out here for years and years, so I can’t just let it go to waste.”

Earlier in the Summer, Skendi was spotted having a kick-about with global megastar, Justin Bieber. He explained to us that he and Bieber go back a little bit.

“He is alright. I have known him for a while, I became friends with his friends and we just started playing football and he loves football.

“It is just a little five or six-a-side, just messing about, nothing serious.

“It is always crazy when he is out there, there are so many people out there, I do not even know how they know he is there to be honest. There is like 20 (paparazzi) out there hiding in bushes.”

Albi clearly has a soft spot for Yeovil Town. After spending two seasons at the Glovers and playing 75 times there is a clear fondness for the supporters.

“I loved everyone there, everything at the club, they showed me so much love, it was overwhelming.

“Sometimes the game they would be shouting my name and chanting my name, that was emotional, I loved it,” he said.

Speaking about a certain chant, he added: “so many people know that song, I don’t know who made that song up but it is crazy.”

As for the future Stateside, it’s a blank slate.

“I am going back to the drawing board to see what I can figure out, I would love to carry on playing football, but if it’s not meant to be I will just go to a 9-5 like everyone else.”

The Gloverscast approached the club for an update on the situation and we were informed that the comments from the chairman and manager were the only update.

However, manager Darren Sarll did comment on his AWOL midfielder in his press conference ahead of the trip to Boreham Wood.

He said: “Like I have always said, I have nothing against Albi, it’s his life and he’s got to live it like he sees it, but he’s not here.

“He still has a contract with us, there are certain elements of contracts that mean you have to be here, like in any employment contract.

“I have nothing against Albi, it’s his life and life’s too short for Albi to not make the decision he’s making but also for me not to worry about someone who is not here.

“But I am only concentrating on things that affect us and there are so many of these players who need our time and attention that are here, I think they deserve that attention than those whose aren’t here.”