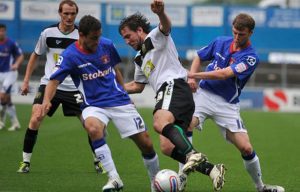 The curtain came down on another successful season in League One with a 2-0 away win at Carlisle.

The win, thanks to goals from Jon Obika and Dean Bowditch, meant that the Glovers signed off the season with a six-match unbeaten streak.

Three points on the final day of the 2010/2011 season secured Yeovil a 14th place finish, level on points with Carlisle and Charlton who only finished above the Glovers on goal difference.

It also meant that Sheffield Wednesday finished below Yeovil Town in the final standings whilst Plymouth Argyle, Bristol Rovers and Swindon were all relegated out of the division along with Dagenham & Redbridge.

Dean Bowditch ended the season as the club’s top scorer with 15 goals, whilst on loan ‘keeper Stephen Henderson picked up the majority of the end of season awards.

The Carlisle side that day included both Francois Zoko and Paddy Madden who would both go on to do alright in green and white later in their careers.