GLOVERSCAST EXCLUSIVE: Maksimenko – Yeovil “One of the Best times of my career”

The topic of the 2013 Yeovil Town League One Play-Off team is one that often crops up around these parts, we can all recall Paddy Madden popping one in the top corner, we all know James Hayter never did get a touch on Dan Burn’s header, we all bit our fingernails to the bone and sighed in relief at everyone of Marek Stech’s wonderful saves, but this was more than just a team game – we needed a whol squad.

The image of Jamie McAllister lifting the tropy aloft will live long in the memory – but let’s not forget, he didn’t actually complete the game.

With 77 minutes on the clock, his reoccuring groin problem flared up, his broken nose had become swollen and bruised, he had to be replaced.

Defensive options on the bench that day were Richard Hinds, a wonderful central defender, but not naturally a full back and so the call went to young Latvian full back, Vitalijs Maksimenko.

We pondered on a recent episode of the Gloverscast podcast with Media Officer James Healey, what had happened the the man signed on loan from Brighton, well, I found him, dusted off some Google translate and set to work trying to get him to answer our questions… and he DID!

Vitalijs now plays in Slovenia, with NK Olimpija from the city of Ljubljana, he was part of the team that lifted the Slovenian Cup this season, he played 89 minutes in the final, a 2-1 win over FC Cejle.

We fired over some questions about his short spell at Huish Park, which saw him make just four appearances, one of which came at the home of football.

Vitalijs said; “That was a good time. I spent there three months on loan from Brighton. It was a good team, a good squad. I remember all the guys so yes, I really enjoyed the time there.”

Of course the deal was brokered by Gary Johnson, who is still so fondly remembered in Maksimenko’s home country, Latvia something which the full back said only made the experience better.

“He (Johnson) is a legend in Latvia, yes. Everybody still remembers him because he did a good job with national team. I thank him a lot and I really appreciate that he took me to Yeovil on loan because this was my first experience in England. He is a really good coach. He motivates and trusts his players. I have only positive words for him.” 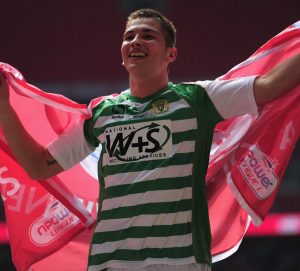 Vitalijs made his debut against Oldham in April 2013, and would start two other league games vs Crewe and Bury as McAllister continued to recover from his injury.

But of course, his main memory comes from the showpiece final at Wembley. He was on the bench for both semi-finals, but never came on, those 25 minutes at Wembley were his time to shine

“I think that this was on of the best times in my career. Everyone dreams about playing in Wembley, especially to [be] promoted to the Championship. I started the game on the bench and in the last twenty minutes our captain McAllister was injured so I didn’t even have the time to be nervous. Everything happened quickly. I came in and we had to hold the result. We succeeded.”

“It is an honor for me to have a medal from England, from Wembley Stadium. This medal is in my home in Latvia. I am really proud to have it.”

Famously, as pointed out by James Healey on the podcast, Maksimenko couldn’t stay to enjoy the celebrations, he was called up for international duty and would play for his country against Qatar just 72 hours after the play-off final, but despite the quick exit, he said that through the power of social media, he keeps in touch with his former Glovers’ team mates.

“We are following each other on social media, Jamie McAllister, Byron Webster, Paddy Madden … Sometimes I text the guys just happy birthday or when something happens. When Jamie McAllister retired he became a coach and I texted him immediately to congratulate him and wish him all the best in his new career.” 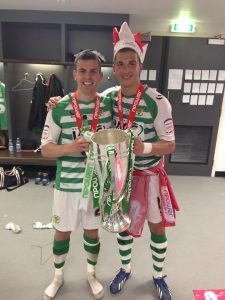 Vitalijs Maksimenko might not be the first name that pops into your mind when you think of that side, but it probably shouldn’t be the last either, four appearances and 25 all important minutes in the final put him in the ‘Cult Hero’ category at Huish Park, he was simply happy that we had remembered him and made contact to see how he was getting on, I asked him if he has any words for the Glovers fans, and to be honest – they’re lovely.

“To Yeovil fans I would like to say in this tough time for the club that I wish that in the next couple of years Yeovil will come back to where we have been. Slowly in League 2, League One and promote as high as possible. Stick together all the time. The team needs supporters.”

A huge “paldies” (Thank you in Latvian) to Vitalijs for taking the time to answer our questions, an extra “hvala vam” (Thank you in Slovenian) to the NK Olimpija Press Officer Kristjan Pahor for all his help for making this happen.

Who would you like to see us track down next? which ‘cult hero’ is worthy of some dodgy translations and a few questions fired over the interweb? Let us know!