Yeovil Town defender Luke Wilkinson has been given a place in the Non League Paper’s ‘Team of the Day’ following his performance against Notts County.

The Glovers may not have won, but Wilko has been listed along side Barnet’s Ben Richards-Everton and Jesse Debrah of Halifax in the mythical side’s defence.

The full team is as follows… 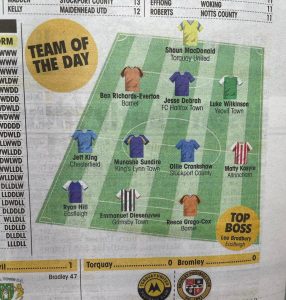