Wild: “Neither Side Deserved To Win” 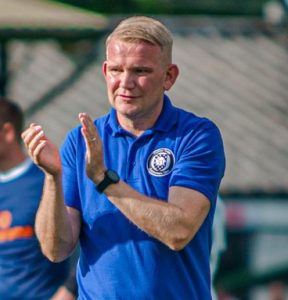 He said that his side had ‘”given Yeovil too much respect” in the first half before ‘”totally dominating'” the entire second half.

The only goal of the game came from Joe Quigley’s right boot, 12-yards out he smashed home his second penalty of the season and it was enough for all three points.

Despite, the entire BT Sport analysis team, commentary team and most importantly the referee all in agreement it was the right decision, Wild wasn’t so sure.

Speaking to the Halifax Courier he said:“Naz (Niall Maher) is clearing the ball and he falls over his leg – how’s that a pen?…These decisions seem to happen week-in, week-out and nothing gets done about it.”

Maher’s foul on Tom Knowles wasn’t the only time Wild got angry with the officiating – the  manager got booked twice in the space of 60 seconds and saw the last few minutes of the match from the comfort of the away dressing room, an incident he says he was sorry about.

“My frustrations boiled over, I shouldn’t be getting sent-off and I apologise for that,” he said.

“My yellow, apparently, is for getting the ball back in play, which is ridiculous…and then my red, the fourth official’s looked at me, smiled, and given the ball the other way, so I just said ‘you’ve done that on purpose’.

“Highly frustrating, but until the issue of refereeing’s addressed in this league nothing’s ever going to change.”

Overall, Wild was critical of both side’s attacking prowess saying the game should have ended 0-0 and that neither side deserved the full three points.

“But we need to be better. we didn’t test the keeper enough, we looked tired, and we’ve got to be better than that.”