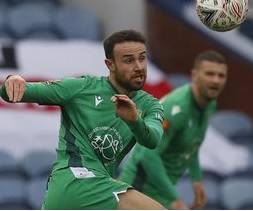 Warburton was signed on loan from Northampton Town during a mid season re-jig of signings but his time at Huish Park was a struggle, failing to get regular game time before departing his loan spell ahead of schedule.

An absolute Rolls Royce of a midfielder on his day, he played 19 times for the Glovers scoring twice, once against Woking and once against his former club Stockport County in the FA Cup.

We wish Matt all the best at the Shay Stadium… with obvious exceptions for games against Yeovil Town.