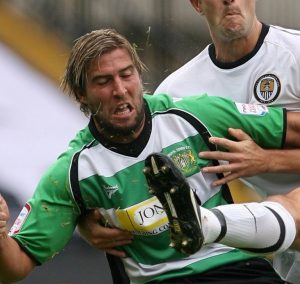 Former Yeovil Town defender and BT Sport Co-commentator Adam Virgo was full of praise for the Glovers after they held off Halfiax Town to record a 1-0 win.

Whilst on commentary for BT Sport, the former defender singled out Dan Moss, Joe Quigley and Josh Staunton for praise before naming Luke Wilkinson as he Man of the Match,

It was Quigley’s first half penalty that separated the two sides in the end, with Yeovil looking controlled defensivley, restricting their visitors to nothing more than half chances.

After the game, Virgo tweeted that it was a ‘deserved’ win for Darren Sarll’s side who recorded their first clean sheet of the season in the process.

Virgo scored five goals in 36 appearances for the Glovers in the 2010/11 season.

Deserved win for @YTFC … thought we would get a reaction from @FCHTOnline second half and we didn’t, game of few chances but a good clean sheet for yeovil today.