The Skivertons – A decade in the making 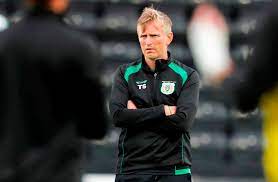 To many people, the Somerset Premier Cup doesn’t mean an awful lot, a Wednesday night tie against Bridgwater United only attracted a little over 300 supporters to Huish Park.

However, they got to witness a little bit of Yeovil Town history.

For the Skiverton family, a name synonymous with the green and white of Yeovil Town, it was a night of pride as Terry – the legendary Glovers’ player, manager, player-manager, academy manager, assistant manager – signalled for a subtitution, a substitution that would welcome his son, Finlay on to the pitch.

With the number 9 on his back, Skivo Junior not only made his first team debut but scored an 88th minute goal to wrap up a comfortable 4-1 victory.

We here at the Gloverscast are suckers for a statistic, so here are a few numbers we’ve crunched.

Between Skivo Senior and Skivo Junior, they have a combined 384 appearances and 45 goals for the Glovers’ first team, but of course, Terry has most of them!

Terry’s final competitive appearance for the Glovers came on Saturday 21st March 2009 – a 0-0 draw against the MK Dons, he came off after just 36 minutes in a game that included the likes of Chris Weale in goal, Paul Warne and Andros Townsend.

That equates to 4568 days since a Skiverton graced the hallowed turf of Huish Park.

As for scoring, Terry’s final goal in green and white came a few week’s before that on Saturday 22nd November 2008, a 23rd minute goal against Tranmere Rovers (see below) would be the last time the name Skiverton made the goal scoring vidiprinter.

Number one in the music charts was ‘Live Your Life’ by T.I. (featuring Rihanna), in the Premier League that day; Man City beat Arsenal 3-0 thanks to goals from Stephen Ireland, Robinho and Daniel Sturridge.

(Feeling old yet? Me too)

Who knows what the future holds for Finlay at Huish Park, but everyone at the Gloverscast congratulates Skivo Junior for his debut appearance and goal… here’s to many more!