Team of the day for defensive duo.

Following the Glovers’ 1-0 win over Dagenham & Redbridge, Yeovil Town defenders Max Hunt and Luke Wilkinson have both been rewarded with different team of the day places. 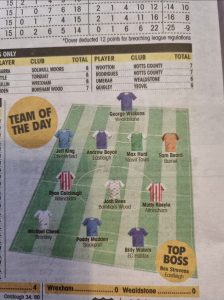 Whilst Luke Wilkinson (who tried to claim the Glovers’ match winning goal) was named in the Vanarama team where Madden was also present.

Both sides also had Bromley striker Michael Cheek in, who Wilko and Hunt will come up against this coming Tuesday night.

🚨 Stop What You're Doing Immediately 🚨

It's @TheVanaramaNL Team of the Week time.

Teams for NL, NLN & NLS below and on the #Thread 👊 pic.twitter.com/B3Rc4ZswsE

Congratulations to both for their nominations.