Yeovil Town youngster Toby Stephens has had his contract extended after the Glovers triggered a clause to further his stay at Huish Park.

Stephens spent time on loan with Barnstaple Town and Hemel Hempstead this past season and had represented the first team in both the Somerset Premier Cup and a handful of league games including off the bench against Stockport during the 3-0 win at Edgeley Park.

Stephens helped see his side to just a 7th win of the season as his temporary club came from behind to win against Melksham.

Ollie Haste who has represented the Glovers in the Somerset Premier Cup this season as part of the Yeovil College/Under 18s programme came off the bench in the same game.

Barnstaple remain bottom of the table and have two games left to play.

Yeovil Town midfielder Toby Stephens was in action this week and, like his parent club, was also on the winning side with Barnstaple Town.

Stephens started in midfield for his temporary side as they overcame Evesham United 2-1 in a big result for the Southern League Division One South & West strugglers.

He received treatment part way through the match after taking a knock to the head but did carry on.

Defender Ollie Haste was also in the side, Haste has been named on the Glovers’ bench on a few occasions this season and represented the team in the Somerset Premier Cup.

Young midfielder Toby Stephens has “a big future” at Yeovil Town and his latest loan spell will help his development, according to manager Darren Sarll.

The 18-year-old has been with Southern League Division One South & West side for the past month alongside Ollie Haste, who has turned out for the first-team in the Somerset Premier Cup and more regularly with the Under-18s.

Sarll confirmed that he will remain with the North Devon side until the end of the current campaign.

He said: “Toby is and is someone we have a long-term interest in. He’s doing great, I speak to (the Barnstaple manager) Craig Laird all the time, we’ve extended it til the end of the season, it gives him the games he would not get.

“I got a not particularly positive report on one game, I made him aware my eyes are everywhere and I’m not prepared to watch him not perform to his optimum.

“There needs to be a pressure on him to perform, he’s a wonderful young player and I hope he has a big future with our club.“

Credit to the Gloverscast listener, eagle-eyed Robin Bachelor for spotting this…

Two of the Glovers’ young guns have been playing for Southern League Division One South side Barnstaple Town for the last couple months.

Toby Stephens, who has been on loan at Hemel Hempstead already this season, joined in late February and has been playing for them since, whilst Ollie Haste who has made a couple of appearances on a bench for the first team has struck a deal on Dual Registration terms with the club as well.

We have reached out to Barnstaple Town to see how they’re doing and will report back if we can!

The 18-year–old made three appearances during his time with the National League South side having joined in mid-November. 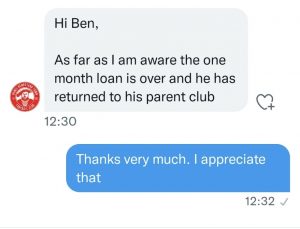 The Tudors are managed by Mark Jones who had a spell among the coaching staff during Darren Sarll’s time at the club.

Neither Yeovil nor Hemel have officially announced the return of the 18-year-old yet, but an enquiry from Gloverscast roving report Ben Barrett suggests he has indeed returned to Somerset.

Stephens has made two substitute appearances for the first-team this season, the last coming in the 5-0 FA Cup win at Yate Town at the start of November, but made five appearances last season.

Assuming the response from Hemel is correct, we’d imagine he will be available for selection in Sunday’s return fixture against Torquay United.

After missing out at the weekend, sitting on the bench for the game against Dulwich Hamlet, Stephens played in midfield for the much changed Tudor’s line up.

Stephens has a week left to go on his initial one month deal having joined from the Glovers on 19th of November.

Yeovil Town’s on loan midfielder Toby Stephens had a watching brief for his temporary club Hemel Hempstead Town as he was a unused sub in their 1-0 over Dulwich Hamlet on Saturday.

Stephens has played twice so far during his short stint away from Huish Park, but failed to add any minutes to the tank this weekend.

Glovers’ manager Darren Sarll told the Gloverscast this week that he has been impressed with Toby’s progression and have been in regular contact with the Tudor’s coaching team.

“[We talk to Hemel Hempstead] daily, daily. Mark Jones, who is manager there, worked for me in year one, Mark’s a good friend, a good coach, and we speak all the time, so it’s a very easy one with Toby,”

“I’m sure people will be a bit confused why we can’t fill a bench, but we’ve loaned Toby out, but I thought it was so important, not just for his career, but for his state of mind, that he saw some football. We’re suffering because of that, because of numbers, but Toby’s contribution [to Yeovil} has been 10, 15 minutes and I didn’t think that was enough for a young man, who’s training every day”

“He needed to play, Mark (Jones) had him here in the youth team, Mark knew him really well, and he needed some help in that position and we were more than happy for him to go.”

Yeovil Town midfielder Toby Stephens started his second game of his loan spell at Hemel Hempstead in their FA Trophy fixture against Stourbridge.

Stephens played the full 90 minutes for his adopted side, and could have won the game late on, but it wasn’t meant to be as the match ended 1-1.

That meant spot kicks and whilst a full list of penalty takers is hard to source, we don’t think the on loan midfielder took one, he certainly wasn’t one of the two Tudor players who missed from 12-yards.

Hemel Hempstead were eliminated from the competition whilst Stourbridge who go onto the third round proper, the round in which Yeovil Town will enter. (draw will be announced on Monday at 1pm)

As an aside, FA Trophy Player Registration Rule 5e states “a player shall not play for more than one club in the competition” and as such, he will NOT be eligible for the Glovers’ during this season.

Yeovil Town’s Toby Stephens made his debut for his loan side Hemel Hempsted FC in their defeat to table-topping Dartford in the National League South.

Stephens played from the start before being substituted in the 77th minute as the Tudors went down 3-2.

A Tyrique Hyde brace and an Ade Azeez penalty cancelled out two Alfie Cerulli goals as the visitors took all three points.

Dartford had a couple names Glovers fans might recognise with Emmanuel Sonupe and Kieran Murtagh both in their starting line up.

We here at the Gloverscast will hope to bring you a few lines from the Tudor_Army twitter account on Stephens’ progress when they get in touch.

Congratulations on your Tudors’ debut Toby!

The 18-year-old, who came through the Yeovil Town Community Sports Trust set up and captained its Under-18s side, will link up ahead of The Tudors’ home match with Dartford on Saturday.

Glovers’ manager Darren Sarll had said on Thursday that he expected Stephens to go out on loan to get more first-team experience.

Confirming the move, he said: “Despite our small squad size, I believe it’s fundamental for Toby’s development, that the young man gets some minutes within a first team environment.

“He’s going to be playing one league below us, so it’s a good standard and learning experience for him which we will both reap the rewards from.”

Stephens has made two substitute appearances for the Glovers this season having come off the bench five times in the last National League campaign.

The only first-team fixtures he has started have been the Somerset Premier Cup against Bridgwater United and Larkhall United.