Smith; there’s nothing better than a 1-0 win

Yeovil Town Goalkeeper, Grant Smith has praised the defensive unit that has proved so strong this season.

The Glovers have conceded just 25 goals during the league season, one of the best defensive records in the division.

speaking ahead of the Solihull game, the a Number 1 was proud of the team’s efforts.

“We don’t concede many chances, a lot of the games where we’ve kept clean sheets, I’ve barely had a save to make, we work very hard on that.” 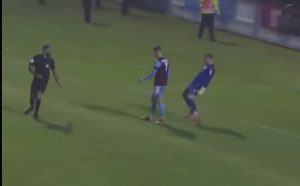 ‘Shakira Hips’ Smith said that whilst he used to set himself targets for clean sheets that was no longer the case as he preferred to keep his focus elsewhere it did admit to the Gloverscast, he’s been known to celebrate a save like a goal and enjoys a scrappy 1-0 win more than most.

“For a goalkeeper, nothing beats a 1-0 win, everyone would love to win four or five-nil and have an easy win, but when you walk off the pitch at the end of the game having dug in for that last 30 minutes, they’ve been throwing absolutely everything at you and you’ve kept a clean sheet, it makes you feel like you’ve done a god job”

“That one on one save in the Stevenage game, I did celebrate it like a goal, I think it comes down to an important save at an important time, it wasn’t necessarily an unbelievable save, it was just an important moment in that game.”

Smith praised Luke Wilkinson for his consistency, Morgan Williams for his flexibility in different roles and Ben Barclay for the way he’s settled into the side but finished by saying that the side were up for the challenge of keeping Solihull’s front men out.

“It’s a good challenge, everyone wants to challenge themselves against the best in the league… But we take it for face value and give them all the respect”