Yeovil Town have announce the departure of manager Darren Sarll as he takes up the hot seat at Woking.

As expected, a number of Yeovil players and those around the club took to social media to say thanks for his time at Huish Park.

Here are a selection, collated in one place.
This article will be updated throughout the day.

Very sad to see the Gaffer leave. I would just like to say a public thank you for everything, both personally and from everyone. You led us admirably through the darkest of days, never taking any credit and I have enjoyed every day of working under you. I am forever grateful. https://t.co/GuGcV64nj6 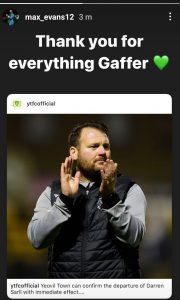 Just like to say a public thank you, Everything you’ve done for me and the lads thru the hard times has been admirable. A top manager and more importantly a top top man 👍 https://t.co/DhGMpWGriT

Massive thanks to the gaffa for everything, learnt a lot from him and wish him the best of luck for the future 👊 https://t.co/YVM0ZXsnCF

🤝 A genuine pleasure to work alongside these last three seasons. All the best boss! #YTFC pic.twitter.com/L76Syrsg3J

On a personal level, I got to know him as a fan before moving to reporting on the club. I had difficult questions to ask at times, but we got on extremely well and I will miss speaking to him every week. Thanks for everything, gaffer, and good luck for the future.💚 #YTFC pic.twitter.com/uLKXsBUA1c

He couldn’t have done anymore for the club under difficult circumstances on and off the pitch, Managers can only do so much if they are not backed and has has taken a side to the play offs and as far as he can, this will be Yeovil lost and now be Woking FC gain… https://t.co/s53FP5aPUC