Sarll pleased with Second half fightback 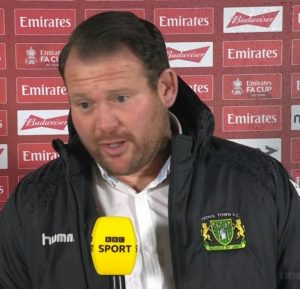 Yeovil Town manager Darren Sarll was proud of his side’s comeback after the Glovers turned a 0-1 deficit into a 3-1 in the FA Trophy game against Woking.

Speaking to BBC Somerset’s Sheridan Robins he said that he needed to give his players a ‘polite’ word at the half time interval.

“When we went in at half time, I thought about the interview afterwards and have to say I’d picked the wrong team, for the right reason, to try and give some players some extra minutes.”

“The second half, there was a different energy to us, the body language was different, because first half was absolute garbage”

“The attitude and energy of the players was magnificent second half and their spirit and their fightback – that’s a really experienced side, Woking, good players, good manager and I thought once we built our momentum and speed of our play I thought we became the team we’d become accustomed to seeing.”

The introduction of Adi Yussuf on the hour mark was a key moment in the game as the Tanzanian international scored a brace to send the Glovers into the fourth round.

Sarll was full of praise for all three subs and the introduction from the start of Max Evans, Alex Bradley and Jeheim Headley

“It’s like a team of misfits and they’re broken pieces of a puzzle, so when any of these lads do well, there’s a real sense of achievement… we like to celebrate their successes and Adi is no different.

(He’s) another one who has done so well for us, it’s taken its time, but he looks so much fitter and stronger now and he made a real difference when he came on.

He was powerful, disruptive and destructive and took his goals well.”

“Young Max (Evans) in goal, didn’t have a lot to do, but I thought he kicked very well, I thought Reuben (Reid) did well – we are a different team to last year, so the service to him was different … Reuben is going to need time, Alex (Bradley) I thought did much better in the second half, I was worried about his booking, so instead of having him suspended and we go to Torquay with one sub, that we save him…”

Sarll also confirmed that winger Charlie Wakefield had a slight injury and had been ill this week and was unlikely to come off the bench, and hoped to have Morgan Williams back in contention for Boxing Day’s trip to Torquay.