Yeovil Town manager  Darren Sarll admitted his “didn’t know” if he would be able to strengthen his squad as his side crashed out of the FA Trophy at the hands of Needham Market on Saturday.

Speaking to BBC Somerset following the game, he admitted he would like to add more players, but that it wasn’t up to him.

The interview showed clear signs of the boss’ frustration at not being able to bolster a side which remains eight points off the National League play-off places with games in hand over teams above him.

He said: “I have tried to conduct myself with dignity because I am not an excuse maker.

“We showed Needham respect with the team we put out, the only one I rested was Tom (Knowles) having been out for a while.

“At this time of year, you usually get that nice influx of new bodies and new characters in the changing rooms, and today is probably the first time I have looked at it and thought we could do with some experience and character.

“I don’t think Mark (Little) will feel like he’s fit enough to really impose himself and Reuben (Reid) is probably the same.

“It’s been a horrible week professionally  and personally and it didn’t get any easier today.”

The Glovers were without (deep breath):

Then there is also youth team players Ollie Haste, who played – and scored – for the Under 18s, and Toby Stephens who absence was unexplained, but who hasn’t featured since his loan spell at Hemel Hempstead. 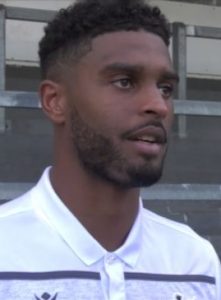 The absentees meant Sarll could only panne four substitutes against Needham Market, one of whom was defender Mark Little who was making his competitive debut for the club having been missing since pre-season.

Sarll admitted he wanted to add players of a certain calibre, but didn’t know if he could.

He said: “These young people are going to have peaks and troughs, I never got too carried away on a winning run because I know how football can change quickly.

”The biggest disappointment in today’s performance  was the lack of personality, we have to keep working.

“It does need a freshen up with some new bodies and I’m sure if we can do that, I’m sure we will and, if we can’t, we will carry on trying to improve what we have.

“I have not got the answers, I wish I did. It’s something that will always go to board level. My job is to always ask for more and keep asking and reminding because no supporter wants to come and watch that standard of performance.

“When I can’t be on the training pitch with them, there’s been a continuum of poor performances when I have not been hands on and that is something I need to look at.

“I need to look at if there’s an impact needs to be made in the backroom staff like (now departed assistant manager) Terry (Skiverton) made and whether we can punch it, it’s just such a shame we have performed so badly after building some credit, we have thrown all that away unfortunately.

“Bringing in another young one is not what we need right now, we need someone who will leave a little bit of a mark in the dressing room where the players look each other in the eye.

“By next week, we will not have Luke (Wilkinson) back but we will have (Charlie) Wakefield back. We lack a real thrust when Knowles and Wakefield aren’t out there and I’ve learnt that the hard way today.”

It is also hoped that full confirmation of Sonny Blu Lo-Everton’s loan extension will be confirmed this week as this FA Trophy tie represented the last of his current spell at Huish Park.