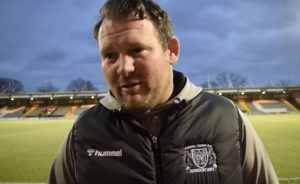 Speaking to BBC Somerset’s Sheridan Robins, he said whilst the players might be ‘gutted’, he wasn’t and he sang his team’s praises.

“I’m not (gutted), the players are and it’s my job to ensure they understand the fruits of their labour, and that’s a magnificent performance, again.

“This is a process, we’ve got young players that are developing, they are exactly where they should be and this is about their journey long term”

The manager went on to make comparisons to Sutton United, who won the National League in 2020/21, but not before building a young squad who finished mid-table in the curtailed 2019/20 season.

Sarll spoke of his side’s endeavour and spirit – something all Glovers’ fans know is second to none.

“I’ll be surprised if anyone has come here this year and stuck it so boldly to Notts County. I told them, and I mean it, I’m not playing games, I was delighted with them. I can see in our attacking play, that we are getting better.”

There was praise for Alex Bradley whose second start of the season brought his first goal and for Jordan “Gareth Bale” Barnett who found himself as part of a front three citing their athleticism, hard work and determination to play for the team.

“I think the chaps have shown an incredible amount of desire and I think we’ve given something back to the people, to the supporters who have travelled so far and spent so much money and that’s all I can ever ask of them.

“I think if we have longevity with the team, I can start to ask a bit more, but right now they are exactly where they are and exactly where I think they should be, and they’re growing week in, week out.

Sarll also confirmed that on loan striker Olufela Olomola, who missed out at Meadow Lane, should be available to make the squad for the visit of Dagenham & Redbridge to Huish Park on Tuesday night, and that there is no long term concern over forward Tom Knowles who limped off at the end against Notts.

Looking ahead to Tuesday, Darren Sarll hoped that the Huish Park faithful would see more of the same, even if he wasn’t overly enamoured with having to play on Tuesday after two long away days… and Dagenham having a weekend off.

“We need to be very very careful, physically with the team, because it’s a long journey, I didn’t want this game on this Tuesday (vs Dagenham) I thought it was unfair after two long away trips to put another game in, the league voted against us… we always seem to lose those ones… but we’ll go.

“Once we break the ceiling of those two goals in a game, I think we will unleash a war chest of other attributes we haven’t seen yet. We are pushing, we are really pushing and I’m really proud of them today.”