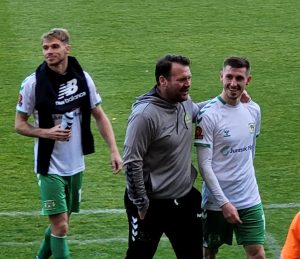 Yeovil Town Manager, Darren Sarll has been heaping praise on his side after a second away win in 72 hours with a 2-1 victory over Bromley.

Goals from Tom Knowles and Charlie Wakefield secured the points either side of a Michael Cheek penalty.

Sarll praised the spirit of his team when speaking to BBC Somerset’s Sheridan Robins.

“This group, their spirit, on Saturday I called it their ‘USP’, I thought their spirit, their running ability, their fitness levels… it’s their thing.”

Sarll called the awarding of the Bromley penalty ‘soft’ but reiterated the praise for his team, as not long after, Wakefield scored what would be the difference making strike shortly after.

The gaffer mentioned he was excited about ending the month strongly with games against Dover, Wrexham and the FA Cup game against Stevenage coming up shortly.

He praised goalkeeper Grant Smith for a save he referred to as important as a third goal, with another shout out for the defensive unit as a whole.

But, he was quick to temper a few expectations with the Glovers unbeaten run now stretching to seven.

“We’ve got a lot of work to do, we need to stay really balanced with this group of players because I’ve seen this so many times in the past where people get giddy, we have literally had to give our lives, our limbs, our blood, to win these games of football – and credit to the players for a magnificent performance.”