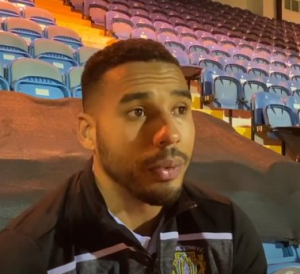 Yeovil Town front man Reuben Reid has been back in training this week as he steps up his recovery from injury.

Darren Sarll confirmed the former West Brom man was back on the training pitch and could edge closer to a return to the match-day squad soon.

“Reuben has trained two or three days this week, which is very good good, it’s the first time since pre-season, the build up to the Weston Super-Mare friendly”

“He was great, it took him almost 30 seconds of a training session to telling someone what he liked and didn’t like, which is true Reuben style, he’ll do another session today (Friday), I think tomorrow (vs Dover) is too soon”

It might not be much longer before the ex-Cheltenham and Forest Green forward is back as Sarll said he was targeting the FA Cup game against Stevenage for a potential return to seeing Reid on the team sheet.

Reid has seven league goals in 46 appearances across two spells so far.