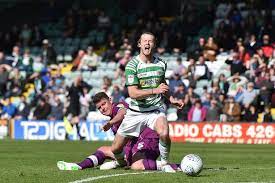 Yeovil Town bowed out of the Football League on this day in 2019.

Relegation has already been confirmed after a 2-2 draw against Northampton Town the week prior but the Glovers played out a 0-0 draw with Carlisle to officially bring down the curtain on a Football League journey that had begun in 2003.

3418 people were in Huish Park to watch the somewhat drab affair.

Of the YTFC squad on that day, only Matt Worthington and Gabby Rogers remain with the Glovers.

It would also spell the end of Neale Marmon’s temporary stint in charge at Yeovil having taken over from Darren Way once the former midfield stalwart had been relieved of his duties prior to the run in.

As is customary, the end of season awards were also handed out with on loan ‘Keeper Nathan Baxter swooping all five Player of the Season trophies.

Alex Fisher ended the season as the Glovers top scorer with eight goals.