International honours are rarely bestowed upon those at Yeovil Town, let alone winning international tournaments, yet, on this day in 2003 no fewer than five Glovers stars got their hands on the prestigeous… (checks notes)… Four Nations Cup.

The England National Game XI – which would later become rebranded as ‘England C’ – was the international side where players were picked exclusively from Non-League sides. 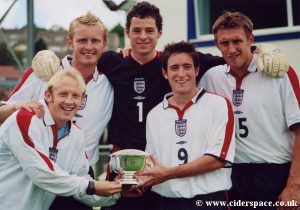 Yeovil had just been promoted from the Conference and would go on and take their first crack at the Football League later that year, so this tournament represented the last chance for many of these stars to pull on the ‘three lions’.

Critts would sadly have to pull out of the squad, but the other five all played in a key role in lifting international silverware for their country.

Ealier in the tournament, Jackson had scored a Hat Trick vs the Republic of Ireland whilst Way notched vs Wales a few days later.

The squad also contained a few familiar names alongside the Glovers quintet.

Scott Guyett (who we were sure was Australian) was called up from Chester City, Michael Rose represented Hereford whilst Lee Elam and Paul Terry both played their parts in the squad too.