“In Goes Stewart… THEY’VE ONLY GONE AND DONE IT”

Where do you even begin?
As a Yeovil Town supporter of 21 years, the emotions of that night on the side of the River Trent will live long in the memory.

2-0 down from the first leg in Somerset, how could Yeovil go to the City Ground and over turn that deficit?

The myths and stories are legendary, the Forest players had already had their suits fitted for Wembley, the cars parked around the city were already plastered with adverts asking fans to book their travel and their hotels, but Arron Davies, Chris Cohen and Co had other ideas.

It was magical, something I’ve been lucky enough to write about before, including in Martin McConachie’s excellent book ’10’ documenting the Glovers first 10 years as a football league club.

I’ve tried to write this On This Day a few times, and never felt I’ve done it justice.

So i’ll leave it to Ben Barrett from 2011 with the YouTube highlights (below) still a regular clip on the play list in my house.

1095 fans made their way to the City Ground knowing turning over a 2-0 deficit might be mission impossible.

Being in that away end for the two and a bit hours that I there was remains the most incredible few hours of football I have ever witnessed.

The pattern of play was the same, Yeovil were probably the better side for most of the game, but the way the match flipped and twisted a thousand times and the stories that unfolded on the side of the River Trent couldn’t have been written.

Arron Davies made the tie interesting in the first half, a brilliant solo goal got the atmosphere bubbling nicely, even at 2-1 things were going to be difficult. 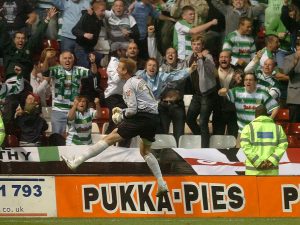 “Paul Smith in the Forest goal pulled off a double save worthy of the Champions League final before Marcus Stewart flashed a shot over.

That’s probably everything you need to know about the first half, it was that kind of game.

The second half started with a bang. Scott Dobie wrote his part of the script by scoring to level things up.

An ordinary goal to break an extraordinary barren spell, it was his first goal in 21 months. They say timing is everything.

As far as my memory serves me, nothing happened between the 48th and the 80th minute.

Neither side wanted to make a mistake, everything bounced around in midfield and no-one wanted to cost their side at a crucial time.

The next chapter belongs to Chris Cohen, the man who had masterminded Yeovil’s success by pulling the strings in midfield was injured, he would play at Wembley but as he left the field we knew he was off for good. We didn’t expect him to move to Forest however. Still, the £1million helped.

Anyway, I digress, Cohen was off, but Jean Paul Kalala was on, JP was a tackler rather than a play maker and yet it was he who fired a shot in from 25 yards just as it seemed all hope had gone. 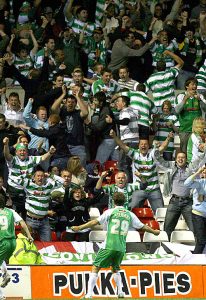 That shot didn’t go in, it struck the post before rebounding to Alan Wright, the Sheffield United defender had been released by the Blades before playing for his loan club that night.

His day went from bad to worse as the rebounded shot hit him square in the face and trickled over the line.

3-2 on aggregate, Yeovil had 8 minutes to find one last goal for extra time.

It has taken me a while to get there, but my play off memory is this.

Andy Lindegaard, a full blown Yeovil legend picks the ball up on the right hand side, he delivered a cross, Paul Smith didn’t come out and Marcus Stewart jumped.

Stewart’s forehead met the ball with perfect timing, the ball hits the net and we in the away end all go ballistic. 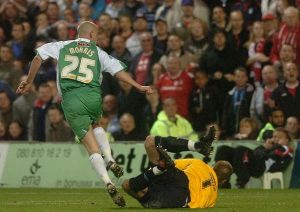 Of course, that line sticks long in the memory of Glovers fans, but it was by no means the end of the game.

Extra Time loomed, Lee Morris put us ahead after *that* Wes Morgan backpass, Grant Holt tried to throw a spanner in the works, David Prutton was a spanner and got send off and then Davies once more… a drop of the shoulder, a momentary pause… then, well back to past me….

“I was singing yet I was silent, I was happy yet there were tears, I was dancing yet I couldnt move a muscle”

“This wasn’t supposed to happen, we stayed in the away end until the stewards had to go home, we sang in the car park and in the services on the way home”

Yeovil were on their way to Wembley for the first time in their history thanks to a night, no Glover will ever forget.