By: Ben Barrett
In: Latest Yeovil Town News, On This Day
Tagged: On This Day, Play Offs

Yeovil Town played their first ever Football League Play Off fixture on this day in 2007.

The Glovers welcomed two-time European Cup winners, Nottingham Forest to Huish Park for the first leg of the League One play off semi final. 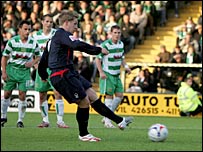 Despite outplaying their counterparts Yeovil would succumb 2-0 in the end, thanks to a couple of penalties from Kris Commons and James Perch.

Nearly 9,000 supporters were in the ground for the game with the pictures beamed around the world on Sky Sports as well.

After the game, Forest were famously rumoured to be planning their trip to Wembley already with the players measured for suits and hotels all booked before the return leg at the City Ground.

… and we all know what happened on ‘that night on the side of the River Trent’, more on that on a later ‘On This Day’.