No Glovers in England C squad.

Paul Fairclough has announced his England C squad for the upcoming game against Wales.

As expected it is full of the very best from the National League, but there are no current members of the Yeovil squad that make the cut.

Three former Glovers make the cut, Scott Loach (Cashterfield), Ben Tozer (Wrexham) and Nathan Ralph (Southend) have all been selected for the game on March 30th.

There does appear to be a ‘contingency squad’ with Wealdstone announcing two of their players had been called up, despite not appearing on the list.

If any of the current squad are also named in the back up squad they could be called upon for the game which is scheduled for inbetween the Southend and Barnet fixtures.

The team includes Paul Mullin who was being touted for a full Welsh call up this season and Dagenham’s Matt Robinson who will be in the visitors squad at Yeovil this coming Tuesday.

The full squad is as follows… 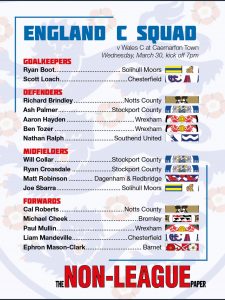