Moss: “I’m loving it at Yeovil” 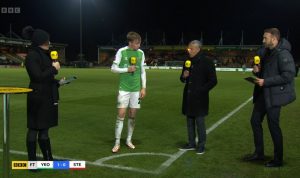 Yeovil Town loan defender Dan Moss spoke to the BBC TV pundits pitch side following the Glovers’ 1-0 win over Stevenage in the FA Cup second half.

He told them he was really enjoying his temporary stint in Somerset and the win was down to the teamwork of those around him.

“I am loving it. It is a massive result, a real team performance, everyone dug in deep and you can see it at the end, everyone just throwing their bodies in to get the win in the end.”

Moss, on loan from Millwall for another month was speaking after getting the television’s Man of The Match nomination, for, amongst other moments, a last-ditch tackle to prevent a ‘Boro equaliser.

“When it was happening, I saw my runner running late and thought I just had to get my body in the way, it looked good on the camera.”
“The other boys are putting them in as well, so it is not just me.”

Grant Smith in goal made a couple of good saves to keep his side’s nose in front, something which Moss appreciated.

“He was quality again, he is a great keeper and he’s helped us out a bit, he’s dug us out. He’s class.”

The 21-year old recieved praise from Darren Sarll this week who said his performances have shown great maturity and his MOTM showing on prime time Saturday night TV will only enhance the young man’s reputation more.