In-form Yeovil Town head to the English Riviera on Boxing Day for the first of back-to-back fixtures against Torquay United – with the return fixture at Huish Park scheduled for January 2.

Gary Johnson’s Gulls are something of a hit-and-miss side this season, crashing out of the FA Trophy at the hands of Tonbridge Angels last weekend after back to back wins against Stockport County and W*ymouth in the National League.

Currently lying in 16th with 24 points, Devon’s yellowest side are no fewer that seven points behind the Glovers having conceded over twice as many goals as Yeovil.

That being said, they’ve also scored a fair few more (28, to our 20), more so at Plainmoor their form is pretty good; one defeat since mid-September, they’ve only failed to score once on home soil this season and will be feeling confident.

There’s been quite a turnover since reaching the play-off final – and eventually losing on penalties to Hartlepool United – at the end of last season.

Gone are goalkeeper Lucas Covolan, who scored a dramatic late equaliser and saved two penalties in the in the play-off final shoot-out at Ashton Gate, along with former Yeovil loanee Ben Whitfield, defensive kingpin Kyle Cameron and striker Aaron Nemane.

Nemane scored in the 6-1 drubbing handed out to Darren Sarll’s men on a Boxing Day to forget last year, and got the opener in the reverse fixture – only for late goals from Josh Neufville and Luke Wilkinson to win it.

Boxing Day encounters tend to be ones to forget for one side with Yeovil handing a can of the proverbial to Johnson’s charges with a 6-2 win at Huish Park in 2019.

Note: As a reminder that all of Dan Moss, Josh Staunton and Tom Knowles are one booking away from missing the reverse fixture on January 2.

Listen: You can still catch our pre-match chat with Torquay fan Danny from the Torquay Talk podcast on our latest edition – here. 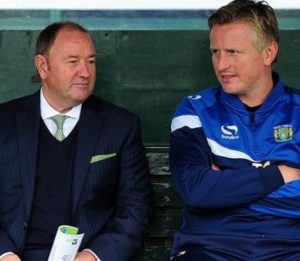 “It’s a massive game for us, I always enjoy the Yeovil games because they’re always competitive.

“Last year we had one good one and one bad one in the space of just a few days.

“Yeovil are going very well at the moment as far as their form is concerned, I think they’ve won their last six out of eight (Ed: IThat’s in the League, Gary, and ten wins out of 12 in all competitions) , but our league form isn’t too bad either.

“So, it should be a good entertaining, competitive, match for the watching public, and I’m sure the Yellow Army will get behind their team and see them through.”

Centre forward Danny Wright returned to goal scoring form against Tonbridge in the FA Trophy and will be in contention to start.

The match was the 37-year-old’s first game in three months and his return would be a boost for the hosts.

It is also expected that Shaun MacDonald (not that one, this one’s a keeper who played in the 6-1 result at Plainmoor last Boxing Day) will return in goal for the Gulls after sitting out the FA Trophy.

There’s no suspensions for Gary Johnson’s men, but midfielder Connor Lemonheigh-Evans has only managed six minutes in the last month suggesting he is an injury doubt.

As Danny from Torquay Talk told us on the podcast and as many Yeovil fans will no doubt recall, Gary Johnson is keen on playing his cards close to his chest about his team – so wait and see on that one.

The aforementioned Mr Johnson brought in Exeter City left-sided player Jack Sparkes, who can play left-back or further forward, last week, as well as winger Joe Felix who joined from Billericay Town a couple of weeks ago and is looking to make his debut,

Also on loan are giant striker Sinclair Armstrong, the 18-year-old who borrowed from QPR who scored the winner at W*ymouth the other week (kudos for that, Sinclair), and right-back Harry Perritt, who is on loan from Accrington Stanley.

One player who we’ll definitely from see is G**** *****s (name removed to adhere to Gloverscast Rule 5), the former Glovers’ youth team (and briefly first-team) winger who joined Torquay after his contract expired at Huish Park in the summer. He is on loan at Paul Wotton’s Truro City.

The obvious connection between the two sides is Torquay boss Gary Johnson, but he needs no introduction to Yeovil fans.

Glovers’ top-scorer Joe Quigley, who will not feature on Boxing Day having only just returned to training, spent a two-month loan spell at Torquay whilst an AFC Bournemouth player.

But more likely to feature is another visiting forward Reuben Reid who spent seven games on loan at Plainmoor in 2007 on loan from Plymouth, scoring twice.

There are also two members of the Torquay squad with a foot in both camps. One is goalkeeper Marcin Brzozowsi, out at National League South side Gloucester City presently, who played twice in a half-a-season loan at Huish Park in 2019, whilst naming the other would be a violation of Gloverscast Rule 5 – but he’s out on loan at Truro City. See Team News for a clue on that one.

Striker Martin Gritton is a legend in yellow having scored 22 times in 88 appearances between 2002 and 2004 but is less so at Huish Park where he failed to find the mark in two loan spells in 2001 and another a decade later.

He’s actually a commentator on BBC Radio Devon these days, so you can listen to him if you want to tune in to them – we’d recommend BBC Somerset though.

Others with a foot in both camps (and there’s undoubtedly more) include:

There are no tickets on sale on the day, BBC Somerset have audio coverage, Three Valleys Radio don’t… and we’ll do everything we can to give you a post match breakdown here as well later on Boxing Day too.