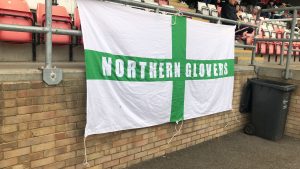 A dramatic final two minutes of the first half, saw Yeovil benefit from the only goal of the game as the Glovers beat high flying Dagenham & Redbridge 1-0.

A solid defensive display ensured that the first half own goal from Paul McCallum was all that separated the sides in a feisty encounter, this is how the Gloverscast’s Dave Coates saw the game…

After an even opening exchanges, Charlie Wakefield broke down the left and went shoulder-to-shoulder with Callum Reynolds in the box, going down under pressure.

Put that one in the ‘you’ve seen them given, but you’d be annoyed if they were given against you’ box.

That lifted Yeovil and on 17 minutes, Wakefield was through again, but this time his shot was weak in to the arms of keeper Elliot Justham.

Tom Knowles has shot well held by keeper shortly after before Reynolds was gifted a free header but it only went in to the hands of Grant Smith.

The attacking threats of Paul McCallum, back after a five-match suspension, and ex-Yeovil man Angelo Balanta were there in flashes of quality but  without creating too much to trouble Smith.

Balanta put effort wide on 25 minutes and the Colombian came close with a header shortly after, but the first half was dominated by the visitors who looked in control and threatening against an opponent with undoubted quality in their ranks.

It took until the closing stages of the half for the game to break in to life. Knowles and the outstanding Dan Moss linking up well down the left, feeding the ball in to the box where Matt Worthington was lurking, only for Justham to intervene at the vital moment.

From the next move, a long throw by Knowles looped over the defence and skimmed off the head of Daggers’ frontman Paul McCallum for an OWN GOAL as the game entered injury time.

There were numerous bodies in the box and although the goal went down as the hosts’ mistake, it was due in no small part to the Yeovil presence in the box.

But the half was not finished there, and moments later Elliott Johnson flew in for a tackle on Dan Moss, sparking a melee which ended up with Johnson getting a straight red card.

Never leave early for half time.

If anyone thought going down to ten was going to stop Dagenham from pressing for an equaliser after the break, they were mistaken.

However, the first clear-cut chance came after 55 minutes when Moss’ ball in from the right fizzed through the box where Yussuf was the most obvious target but the ball was cleared.

But, at the other end it was half-time substitute Myles Weston was causing problems down the left hand side, enjoying a running battle with Jordan Barnett, who can feel hard done by to be edged out of contention for my man of the match by Moss, either player could deservedly have claimed it.

But, having soaked up that pressure, it was time for Yeovil to attack. On 63 minutes Wakefield ball found Knowles in space on the edge of the box , his shot was well turned aside by Justham.

To give Dagenham credit for the bulk of the second half, it was not obvious that Yeovil were playing with a one-man advantage.

Dagenham continued to press with Weston at the heart of their threat going forward.

When winger who drew a foul from Barnett with 15 minutes remaining, a fine Josh Staunton header cleared the danger for a corner from which McCallum sent a header goal bound only to be nodded off the line by Wakefield on the post.

From then on there was wave after wave of attacks from the hosts, Weston causing havoc to the extent he was eventually given the sponsors’ man of the match despite playing just the second 45 minutes.

But, aside from a George Saunders’ shot cleared away by Dale Gorman, there were no real threats to Grant Smith in the visitors’ goal.

The exhalation at the final whistle was ecstasy and relief – six unbeaten, we travel to Bromley on Tuesday night with no fear.