Conditions: Dry and warm, except for a spot of rain the second half

Pitch: In decent nick for the final game.

A first half strike from Tom Knowles was enough to secure Yeovil Town a final day win and ensure caretaker player-manager Josh Staunton’s managerial career ended with a 100% record.

But, it was a man of the match performance from young goalkeeper Max Evans which was the story of an otherwise uneventful match.

The teenager was handed his debut by Staunton in place of first choice keeper, Grant Smith, and rewarded him with some outstanding saves as the hosts pushed for an equaliser in the second half.

On a day that club captain Luke Wilkinson and midfielders Dale Gorman and Matt Worthington did not even feature in the squad whilst youngster Ollie Haste came on as a late substitute to make his debut, the match had an end of the era feel to it.

Here’s how it all looked to Coatesie saw it from the away end….

After an opening 15 minutes with little more than a half-chance to shout about from either side, the ball found its way to Sonny Blu Lo-Everton who played a beautiful ball through to Tom KNOWLES who lashed home the opener with Reuben Reid lurking at the far post.

Moments later Ryan Colclough almost found an instant response, bursting down the right but his ball was turn away by Morgan Williams, before moments later Jake Cooper fired wide for the hosts after a misplaced pass by Alex Bradley.

It took 20 minutes for anything else to happen in the game and that was an injury to Charlie Wakefield who was replaced by Adi Yussuf after 36 minutes.

He went in up front alongside Reid with Lo-Everton dropping back in to midfield  from the more advanced position he had adopted.

Altrincham’s threat was coming down the left side from Colclough whereas at the other end there was liveliness from Knowles (as has become standard) but little else to get excited about.

A minute in to first half stoppage time, Colclough’s ball in was flicked wide by Marcus Dinanga. That half-chance was a moment of excitement when on ‘fans’ appreciation day’ at Moss Lane.

The half-time announcement of the raffle draw was another highlight – it was that kind of 45 minutes, folks.

The half-time interval saw young substitute Ollie Haste warming up on his own, albeit he ran along halfway line twice before disappearing in to the dressing room.
It took until the 51st minute for something to happen when Lo-Everton picked up the ball in midfield, skipped past a couple of tackles and poked it through to Yussuf who either tried to bustle his way through and was blocked or gave up. You decide.
Play immediately swung to the other end where Colclough, the hosts’ threat in the first half, was denied by a smart stop from Max Evans.
Evans was in action again dropping to his right to deny Cooper before Colclough lashed one wide. 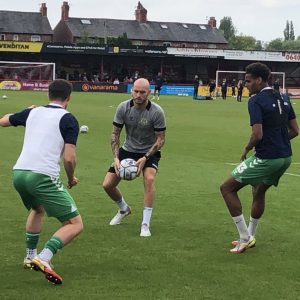 The home side certainly began to grow in to the game and Colclough almost found himself on the end of a cross from Pringle. The winger was certainly keen to add to the 11 goals he has his season with Alty seemingly able to stroll through the visitors midfield at will. What is Josh Staunton up to today? Oh yeah.
Little was caught out 30 yards from goal and Pringle fed it through to substitute Josh Hancock, but his shot was easily stopped by Evans, fast becoming the visitors’ man of the match.
If that fact was in doubt, the teenager pulled off another superb stop to deny Mooney who had carved his way through the visitors’ defence.
Moments later, Hancock inexplicably beat the offside flag to break through on goal and pulled his shot across goal.
On 83 minutes, Yeovil’s best chance saw Yussuf charge forward in to the box, squared it to Reid who paused and allowed the Alty defence to get a challenge in.
Seemingly unhappy at watching his midfield allow the hosts to attack that caretaker player boss Josh Staunton brought himself on. It is fair to say that he had not prepared for it.
With Altrincham committing men forward in search of a goal, Yeovil found gaps with chances to Yussuf who lifted one over from out side and Lo-Everton who lashed a shot over the bar. 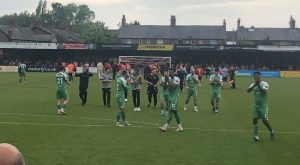 As the fourth official’s board went up, there was one final moment for the visitors as Ollie Haste came on as a substitute to make his league debut for the club.
The applause at the end suggested this may be the last we see or many of this Yeovil again. As on chapter closes, another opens.