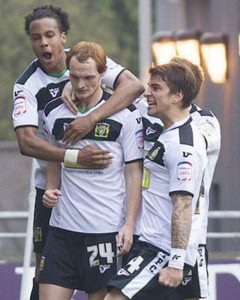 Rotherham United have announced that former Yeovil Town loanee, Shaun MacDonald will be leaving the club at the end of the season.

The Millers, managed by another former Glover, Paul Warne announced their released and retained list on Monday.

In total, the Welsh international played 64 times in Green and White, scoring 9 goals including a hat-trick against Leyton Orient in 2011.

We wish Shaun all the best in finding a new club.