Luton Town academy head coach Adrian Forbes has hailed the impact a loan spell with Yeovil Town has had on winger Josh Neufville.

The 20-year-old’s season was cruelly cut short after suffering a serious ankle injury in the Glovers’ 4-3 defeat at Altrincham at the weekend, having played 31 times since arriving in December.

But, Forbes, the Championship side’s Head of Academy Coaching and Professional Player Development, said the player’s time in Somerset had been of huge benefit. 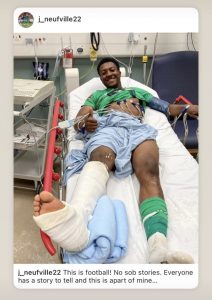 Speaking to the club’s website, Forbes said: “It’s one of those situations with Josh where if he’d stayed with me with the under-21s, he’d have developed, but he wouldn’t have got the experience and education he’s had this season at Yeovil.
“To go and play National League football, week in week out, and do as well as he’s done, you know he can do that now.
“We know the answer, and it’s been really pleasing to see the impact he’s had on that Yeovil team.
“Josh has the two things that no-one can coach – power and pace – and he’s taken that from academy, development football playing against lads his own age, into a men’s league where points and livelihoods are at stake.
“So although his time there has ended prematurely, and in a sad way, in the long run he’ll have gained so much from his time down at Yeovil.”

Neufville is the second Luton youngster to have an impact for the Glovers’ this season with defender Gabriel Osho having also impressed during a one-month loan before being recalled at the start of the year.