Two goals in the last five minutes saw Yeovil Town fall to a heart-breaking 4-3 defeat at Altrincham in a game played with the intensity of a relegation scrap rather than a mid-table dead rubber.

To add injury to insult, the Glovers also lost influential midfielder Josh Neufville after just 12  minutes at Moss Lane, stretchered off in a leg brace with a broken ankle.

It was 90 minutes which summarised this season to be honest – missed chances, defensive clangers, a huge amount of character/spirit/willingness, injuries, bookings and ultimately falling short.

In front of 600 home fans (one of which was definitely not me, if Altrincham FC are reading this), the home side played with a verve and intensity which many of the supporters I spoke with…..I mean, I imagine, would have loved to have seen more of after they went the last seven games without win.

Striker Reuben Reid replaced suspended defender Luke Wilkinson in the only change from the midweek draw with Maidenhead United, as another patched up side took to the field in Greater Manchester.

The reshuffle saw Reid up front with Joe Quigley as Chris Dagnall dropped back in to midfield and Lawson D’Ath moved from his central midfield role to right-back. Meanwhile, left-back Michael Kelly, who has been playing right back recently, went back to left-back where he replaced Carl Dickinson who went in to central defence.

And then within six minutes of the start, Yeovil suffered another injury when winger Josh Neufville was stretchered off in a leg brace after a heavy tackle from Altrincham midfielder Matty Kosylo, who was booked for the challenge.

Cue a further change as Emmanuel Sonupe came off the bench to replace the Luton Town loanee, who later revealed on his Instagram that 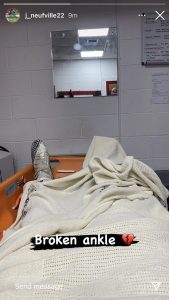 he had suffered a broken ankle.

The injury was heart-breaking for the 22-year-old who has been unquestionably one of the bright spots in an ultimately disappointing season.

I am sure I speak for all Yeovil Town fans when I wish him a speedy recovery and hope to see him back playing football again in the near future.

After a lengthy delay, Reid spurned a good opportunity to put the visitors in front and then on 15 minutes found himself in space inside the box and his effort hit both posts before bouncing away to safety.

Just two minutes later, Quigley was played in on the other side and his shot across the face of the goal clipped the far post and away.

It is not an exaggeration to say Yeovil could have been 3-0 up by this point but, as we have seen so many times, defensive frailties proved they undoing as the home side went ahead on 17 minutes.

D’Ath  was caught out of his unfamiliar right-back position as Alty broke away and, following an almighty goal-mouth scramble Connor KIRBY smashed home the opener which even the hosts’ own Twitter account described as “against the run of play.”

Four minutes later, Charlie Lee’s diving header from a corner was blocked on the line before the home side began to find their feet and were able to carve through Yeovil’s backline on a number of occasions, almost scoring a carbon copy of their opener only for Billy Sass-Davies to clear Ryan Colclough’s shot off the line.

It took until a minute in to the eight minutes added on at the end of the first half for Altrincham to get a second as a ball to the back post found Dan MOONEY unmarked to head home.

We went in behind at the break and, for our missed chances and defensive mistakes, could really have no-one to blame but ourselves.

At 2-0 down, there was every risk this game could have turned in to an embarrassment for Yeovil, but it was the visitors who started the second half the brighter.

On 56 minutes, some near interplay between Reid and Dagnall set up substitute Emmanuel SONUPE to fire home his second goal in three matches.

There was a strong breeze blowing towards the away end at Moss Lane and there’s no doubt it played a part in Alty’s ascendancy in the first 45 minutes and appeared to help Yeovil in the second.

Quigley could have equalised on the hour mark when Reid’s ball across goal just evaded him, but the striker was on target on 69 minutes. A long ball forward from goalkeeper Adam Smith found QUIGLEY with time and space on the edge of the box to lift the ball over Tony Thompson in the hosts’ goal.

Three minutes later, a free-kick in to the box was met by the head of Charlie LEE and from being behind and seemingly playing for damage limitation, Yeovil Town found themselves ahead.

You could have heard a pin drop inside the ground, except for the sound of me biting down on my tongue to avoid drawing attention to the fact I was screaming on the inside!

This was the point where a fully-fit Yeovil Town squad, a luxury enjoyed by their opponents, could have made a couple of changes with a view to seeing the game out for a well-earned three points.

I have spoken on many occasions on the Gloverscast about my desire to see more of our young players, but I can say that a full-blooded affair – with racked up seven yellow cards – was not the place for blooding youngsters.

On the contrary, Altrincham were able to make two changes in the closing stages as they took off goalscorers Kirby and Mooney and replaced them with Tom Peers, who has 31 appearances and five goals this season, and James Hardy.

And, a minute after coming on, a low ball to the near post was turned in by PEERS. The goal was not against the run of play and had been coming as Alty turned up the pressure, but it showed the benefits of having strength in depth simply not available to the visitors – not an excuse, just a fact.

The Glovers’ misery was completed a minute from the end when  Josh HANCOCK found himself in space inside the six yard box and smashed the ball home.

I’ll say one more thing, if the team that took us out of the League played with half the spirit I saw there today, we’d still be a League club. #ytfc

It was my first game since watching Marc Richards’ beauty at Dover Athletic back on March 7, 2020 seal a 1-0 win, and it was everything I have come to associate with the team I have watched on live stream this season.

Effort, flashes of brilliances, moments of calamity and ultimately not quite being good enough.