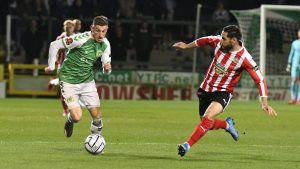 Yeovil Town forward Tom Knowles has joined Walsall for an “undisclosed fee and future add-ons” the club have confirmed.

Knowles, who joined from Cambridge United in November 2020, has been a star for the Glovers ever since scoring 18 goals.

In a comment to YTFC.net the ‘Board of Directors’ said:

“We are extremely disappointed to lose Tom’s services. The club did all it could to convince Tom to stay, making him a significantly improved contract offer that would take his existing deal to the end of the 2023-2024 season.

“However, Tom expressed a desire to play at a higher level and consequently rejected the new contract offer. Under these circumstances, the Club has decided it was in the mutual best interests of the player and Yeovil Town to allow Tom to pursue his career in EFL League 2 if acceptable compensation could be negotiated.

“Agreement on the financial terms of Tom’s transfer has now been reached with Walsall FC and the Club would like to place on record its thanks to Tom for his past contribution to the team and wish him well in the future.”

Just wanted to say a massive thank you to everyone involved at @YTFC for the past 2 years! Your support never went unnoticed and for that I am extremely grateful, I wish the club and the fans all the best for the future as you deserve it! Thank you once again for everything⚽️💚

This is of course an absolute hammer blow to the Glovers’ plans for the new season.

Thanks for all you’ve done for the Glovers and good luck at Walsall, Tom.