Yeovil Town defender Max Hunt has had his one-match suspension confirmed by the Football Association.

Hunt was sent off in the 2nd half of the weekend’s 0-0 draw vs Solihull Moors for scything down Andrew Dallas when through on goal.

The red card has been classified under the “Denying a goal scoring opportunity” (Law 12, S5) category and carries a single match ban.

The FA Club Disicipline mobile site says the suspension ends on Saturday Nov 6th, which means it is confirmed he will be missing for the FA Cup game with Yate Town this weekend

(see below pictures from the FA Player Guidance document where it is confirmed that Yellow Card Accumulation suspensions are competition specific, but red card offences must be dealt with across different compeitions.)

Also sent off in the match was Solihull’s Jordan Cranston, he has three matches to sit out due the more serious offence of “Striking – Violent Conduct” (Law 12, S2). He hit out at Tom Knowles and last time I checked, this was football, not boxing. 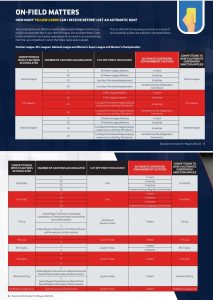 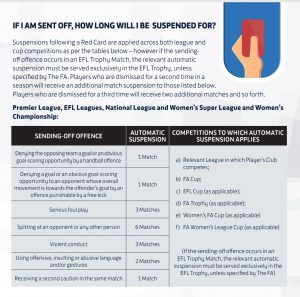