It comes around quicker every year, doesn’t it?

The proudest family in football (at least in pre-season) led by Mr and Mrs Trialist who spend their days travelling up and down the land as their countless children try for professional football contracts.

As is the custom at this point of the year, we have e got a few of the Trialist siblings at Huish Park at the moment, let’s take a look at just our little part of the Trialist family tree.

The former Torquay United and most recently W*ymouth midfielder has spent the most of the pre-season at Huish Park.

Born, raised and still living in Yeovil, it would certainly cut down his commute if the 24-year-old were to return to the club where he began his footballing education.

Since leaving Huish Park he’s had stints at Taunton Town, where his brother, goalkeeper Will, still plays (saving Tom Knowles’ penalty in our recent friendly), before spending two years at Torquay and then splitting last season between Wealdstone and W*ymouth.

The Dorset Echo reports he’s still wanted by the Seagull Botherers and he might also have an option to return to Taunton – however, he’s come off the bench in both friendlies to date suggesting he’s a genuine option for boss Chris Hargreaves.

With our strength in depth greater in midfield than in any other positions, one assumes he is a useful extra body.

Another one with Torquay links, he’s started both public friendlies (and possibly the behind closed doors one against Sherborne Town) at right wing back or right back, a position where we are distinctly lacking.

Once on the books of Arsenal, he was most recently  at Plainmoor, where he would have been known by Yeovil assistant Chris Todd, and was released by Gary Johnson at the end of last season to the surprise of some.

You would imagine that, as he has featured against both Taunton and Exeter and plays in the only position we have no cover in, his chances of staying longer and being offered a deal increase by the day.

He came on as 56th minute substitute for goalscorer Tom Knowles against Exeter City which was actually his first appearance at Huish Park. He came on as a substitute for W*ymouth in their 3-1 derby defeat courtesy of a Rhys Murphy hat-trick in February 2021.

There is a link with Hemel through manager Mark Jones, who had a six-month spell on the coaching staff at Yeovil under Darren Sarll, and obviously Glovers’ young midfielder Toby Stephens had a stint at the National League South side last season.

Two appearances rather than a one-and-done suggests that he’s worth a second (and now maybe a third) look. We’ll see whether he returns against Plymouth Argyle next weekend.

Firstly, yes, I did have to copy and paste that surname after many failed attempts to spell it.

Former Shelborne striker, known as Stano, is a Norwegian frontman with some non league experience with Solihull Moors and Redditch United.

Described by our very own Ian Perkins as “a bit of something different from what we currently have” – we’ll let you be the judge of whether that is a good thing or not.

He was a new face around Huish Park for the Exeter game on Saturday and Glovers’ defender Morgan Williams follows him on social media – if that counts for anything.

Another to make two appearances in an attempt to impressed Yeovil boss Chris Hargreaves is former Swansea youngster Jack Evans.

The 24-year-old Welshman, who was capped by his country at under-19s, under-20s and under-21s level, started out in the academy at the Liberty Stadium and hit the headlines after beating cancer to earn a contract with his hometown team.

He started last season at League of Wales side Penybont before joining Merthyr Town at the end of last season.

Similar to Buse, one assumes Evans will have to show something special to fight his way in to contention in midfield.

The bench against Exeter City only featured a Trialist B, C, D and E (Buse, Fonkeu, Anaebonam, Evans), but Mr and Mrs Trialist’s other little boy, F, also came on.

He played on the left side of the three central defenders which Chris Hargreaves has adopted in pre-season having not featured at Taunton in midweek.

If we had to guess, we’d say Toby Stevenson, a former Watford youngster who is a free agent, but we’ll have to wait and see if he features against Plymouth next weekend.

There’s then a host of other names who look to have fallen in to the ‘One and Gone’ category of pre-season football.

The following appeared in the goalless draw at Taunton Town in midweek but were nowhere to be seen against Exeter City at Huish Park.

A striker released by Middlesbrough at the end of last season having had a disrupted loan spell in Scotland at Kilmarnock.

He has been trialling at both Bradford City over the summer, but is yet to do much to impress.

The 21-year-old featured at Taunton, but his absence against Exeter suggests he’s been told ‘thanks, but no thanks.’

A former Bristol City youngster is another who featured against Taunton, but was nowhere to be seen at Huish Park against Exeter.

He has plenty of goals in the lower reaches of the South West non-League with goals for the likes of Weston-super-Mare and Paulton Rovers, and had a spell at National League level with Aldershot Town last season.

With the signing of Alex Fisher likely completing the ‘attacking unit’, we’re not sure what his future looks like with us.

His absence against Exeter City suggests he may have got a better offer somewhere else – such is the nomadic existence of a footballer without a club at this time of year.

Wasn’t to be seen against Exeter and it probably means he won’t be signing on at Huish Park.

And finally, not a trialist as such, but there has been a Goalkeeper Coach involved at both our pres-season friendlies, who has been identified as….. 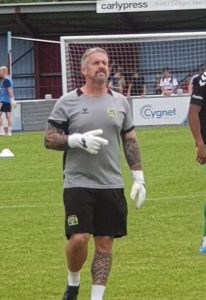 Phil Osborn left Torquay in August 2021 and has been working with Tiverton Town amongst others with his goalkeeping coaching in the area.

Safe to say he knows Chris Hargreaves and his assistant Chris Todd fairly well from their time either at our around Devon.

It’s unclear if he’s just helping our if he’s the new man working with Grant Smith and Max Evans on a full time basis, following the departure of Craig Wight who was the coach with the gloves last season.