By: Ben Barrett
In: Gloversblog

Josh Staunton is the most important player to the future of Yeovil Town Football Club since Terry Skiverton.

That’s a statement isn’t it? I’ve said it, heck I’ve written it down for you the humble reader of the Gloverscast.

You’ve read the headline, you’ve taken the click bait and now you’re waiting to see what I have to say for myself.

Well, I stand by it.

Skivo hung up his playing boots in 2010. 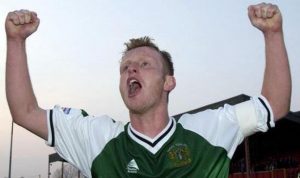 Since then, the Glovers have been okay, been very good and been utterly rubbish sometimes all at the same time.

We hung around in League One, got out of League One, fell back through League One before treading water in League Two and eventually well, here we are a non-League club again.

During that time, there are maybe only a couple of standout moments and teams, the main one of course being winning promotion to the Championship.

I’d argue that, of course, the 2013 team was full of these incredible players, but for me, it felt like a team who had won the Lottery. Marek Stech in goal, Ed Upson, Paddy Madden, Luke Ayling, Joe Edwards, Sam Foley, Jamie McAllister and so on and so forth.

How many of those players, honestly, at that point in time had their next five years planned out at Huish Park? Arguably, none.

We’d have wanted them all to stay but they were snaffled up, pushed out, on too much money, sold for big bucks, given opportunities at clubs they could only dream of playing for just a few months before that group got together.

My argument here is that if you said to me, Josh Staunton has signed a deal at Huish Park until the summer of 2026, I’d not only believe you and I’d know we’d be able to build maybe more than group around him. The last player we could honestly say that with… Terry Skiverton.

Skivo marshalled our 2003 side out of non-League, he led the rampage through League Two, and even that incredible 2007 side to the League One play-off final against all odds..

The Yeovil sides that dropped out of League One with a whimper or sleep-walked out of League Two had a couple of good players and maybe if I’d have written this at the moment of relegation in 2019, this blog would have had a similar feel to it about Carl Dickinson – but he wasn’t exactly reaching his peak years.

Then there’s that first non-League side.

I’m still staggered Darren Sarll found the group he did in less than a month after being appointed, but knowing that group as we now do, I’m not surprised he galvanised them to a play off spot.

It wasn’t to be for Stuart Nelson, Luke Wilkinson, Dicko, Lee Collins, Charlie Lee, Rhys Murphy and Co., and, of course, only one of those names still plays for us.

Wilkinson isn’t exactly old at 31, he’s got a few more seasons left in him at this level, he could probably give the EFL another crack if the chance came along.

His best five or six years are just starting now.

He’s a leader, a midfielder, a central defender, he’s fronted up to the media after losses, and is right now the first name on the team sheet as something of standard setter.

Gloverscast CEO Ian spoke of how his arrival off the bench in the FA Trophy game against Woking from the bench– to protect the already booked Luke Wilkinson – helped change the game. We noticeably missed him in the only 45 minutes he wasn’t on the pitch.

His comeback story from being given a “20% chance of playing again” last season is, quite frankly ridiculous – even our Hollywood friends in North Wales wouldn’t write that script.

The idea of loyalty in football to the level Skivo has shown Yeovil is all but gone, it would be bonkers to think any player from this generation would be with this club until 2042 in some way, shape or form.

But in the following scenarios at the end of this season, with the next four or five campaigns in mind, does this current Josh Staunton not make every single one of them better?

In each of those four scenarios, Josh Staunton provides the on or off the pitch leadership we haven’t really seen since… you guessed it, Skivo.

So, yeah, sure we’ve all made fun about how much I think of Josh this season and how much we clearly missed him last season.

But if we turn the year with a new owner, or start to plan for 2022-23 counting every penny in just the same way we have this campaign, the first signature we should aim for is that of our number 32.

Not just short-term either, let’s set our stall out early as he is likely to be the mainstay of this side well beyond Wilkinson, Reuben Reid and Mark Little – the three elder statesmen of the group.

Staunton has (at time of writing) played just 24 league games for us, he’s about half way to playing more games for us than any other side in his career.

He can lead this side for 100 more games easily, maybe into the Football League and certainly through rocky patches ahead.

There will not be many 26-year-olds at this level with 150 games already behind them and playing at the level where 150 more are perfectly feasible.

Sign him on. He’s the present and future of our team, we cannot throw this chance away.

It has always taken a certain type of player to play for Yeovil. We’ve heard the stories of Staunton joining the other injured players last season in playing a key role in getting the side through the end of the campaign and we’ve seen him don the captain’s armband on a few occasions this term too.

Qualities are not always easy to define, but you know what I mean. We’ve had loanees that ‘get it’ and some that don’t, we’ve had plenty of permanent signings come and go without so much as a shrug of the shoulders, we’ve had short term flashes of brilliance… we haven’t had all those positive attributes wrapped up into one person, one leader who can shape what this football club looks like for the next generation… since, you know who.

I cannot stress this enough, Josh Staunton is the most important player to the future of Yeovil Town Football Club since Terry Skiverton.

I have gone back and forth with writing and publishing this, I’m fully expecting a level of ridicule and outrage, but the reason I’ve gone with it, is that, I want to start the chat about getting contracts sorted beyond this season and quite how our squad looks in the medium to long term and I believe Josh Staunton has every attribute Skivo had and we should everything in our power to harness that.

If Staunton isn’t the most important player to YTFC, why? Who else has affected us (or will affect us) on the pitch in that same time frame?