Glovers trio in FA Cup Team of Round 2

No less than three Yeovil Town players have been rewarded with a place in the FA Cup Team of the Round for Round 2.

The Glovers beat Stevenage 1-0 live on the BBC to land a record 21st Football League scalp in the competition as a non-league side.

Goalkeeper Grant Smith, and on loan duo Dan Moss and Sonny Blu Lo Everton have been given a place in the side as voted for by Twitter users.

The mythical XI also includes representatives of Kidderminster, Mansfield and Leyton Orient, but Yeovil are the only side with three entrants. 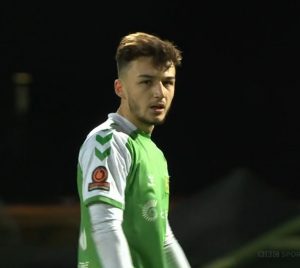 Smith made a number of crucial saves, whilst Lo Everton slid the ball through to assist the match winner from Charlie Wakefield.

Dan Moss was voted Man of the Match by the BBC team and is rightly listed in the side following a string of brilliant performances.

A huge congratulations to all three.

Yeovil Town will host AFC Bournemouth in the 3rd Round on Saturday 8th of January at 17:30pm