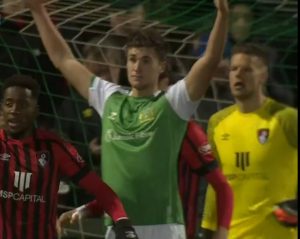 None of the Gloverscast trio were at the Avenue Stadium, Dorchester for the penultimate pre season friendly, but here’s a brief wrap up of the friendly  which ended 0-0, despite good chances falling the way of Max Hunt, Josh Staunton and Alex Fisher.

Magpies goalkeeper Harry Dillon was called into action on a couple further occasions but no one in pink and purple could find the back of the net in the absence of Tom Knowles, who was rested.

Matt Buse continued as a trialist starting the game but Chiori Johnson stepped out of the side with a ‘slight knock’. Lawson D’Ath made his first appearance of pre-season and Charlie Wakefield started his first game.

We will have further reaction on the game with Five Conclusions, but Chris Hargreaves will hope that the goals will start to flow sooner rather than later with just one pre season game between now and the start of the National League season.