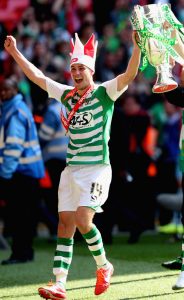 One of Yeovil Town’s class of 2013 is on the hunt for a new club this summer, Motherwell have told Sam Foley he will be leaving at the end of his contract.

Foley, who joined Motherwell from St Mirren in January will become a free agent as the Scottish side look to restructure following the 2020/21 season.

A firm fan favourite from his time in Somerset, Foley played nearly 100 times for the Glovers scoring seven goals .

You’re more than welcome back at Huish Park any time you like, Sam!