By: Ben Barrett
In: Gloversblog, Latest Yeovil Town News
With pre-season now at an end, Chris Hargreaves’ next match day squad will be for the National League opener at Scunthorpe United. BBC Somerset’s Sheridan Robins was at the last friendly in Weston-super-Mare where the Glovers sealed a 1-0 victory. Here are her five conclusions… 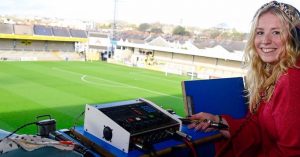 We look to be enjoying playing a back three, but it can be fluid. This was the first time I have seen the Glovers play three centre backs and as was so clear last season, that area of the pitch looks very good indeed. Charlie Wakefield at wing back is an interesting prospect and, as ever, if you give him the ball, he is so dangerous. Jamie Reckord won the penalty getting high up the pitch on the left side and we looked dangerous – particularly in the first half. I am looking forward to seeing the system develop as we switched back to a four in the second period.
Ben Richards-Everton could be the experienced head we need. He was my man of the match against a stubborn Weston side who offered a lot going forward. He put his body on the line, had good positioning and was commanding. I also noticed Morgan Williams was much more vocal than I have seen before, and our new signing could really guide him through after what was a brilliant campaign last season for the centre back/right back/left back!
We may need goals, but we have one ridiculously hard-working striker. The manager was honest about the lack of goals in the side currently, and we need not only more bodies but our midfielders and defenders to ensure they are chipping in too. However, Alex Fisher never stops running – and now I remember his first spell at Huish Park was very much about that tenacity. I try to forget about the 2017/18 season as much as possible, but he always played for the shirt. I hope his goal is the first of many because his attitude and endeavour is second to none and he had some nice layoffs too. Feed the fish etc…we all want to see that GIF again.
We need a relatively injury free season. This may seem obvious, but for real success this season, management of players will be crucial. With Lawson D’Ath having his minutes managed, and a few niggles for our key creative players yesterday, it is apparent how much we need those star players. Any team which does well often has luck on their side injury wise. I think we are definitely due some!
Chris Hargreaves is so excited to be back in management. It was almost written in the stars that Chris Hargreaves’ first match would be on BT Sport after his punditry work for them. But it is infectious to see just how excited he is to be in the dugout for the opening competitive match. I am so pleased we got him in early, so he had time to get to know the players he inherited and add his own characters. Speaking to fans yesterday, there is no doubt they are supporting him, and I am sure he will get a fantastic reception at Glanford Park. Here we go again – let’s hope for a good start!