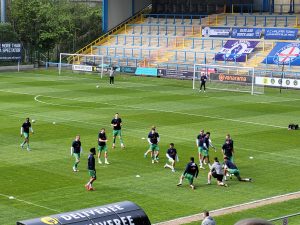 What a strange game we saw at the The Shay, home of FC Halifax Town, yesterday.

As is custom Yeovil gave a top seven team a hard time, but this time, came away with nothing to show for it after an 83rd minute winner from substitute Zach Dearney.

Ben was in the commentary box for the BBC Somerset and here’s a few of his post-match thoughts.

Firstly, the only way the play against Halifax was with a few of the dark arts.

Now, that’s not a complaint, if we had tried to match up to Halifax with the same level of attacking flow and speed, they’d have picked us apart. There’s no shame in that, they’re a better side than us (hardly breaking news). It worked for us against Stockport, Wrexham and others and it was the right way to go about this.

Frustrating them was our best chance and it came, so, so close to working again.

The home fans were silent throughout until they scored late on, a polite ripple of applause all they could really muster, an atmosphere not befitting a side so close to making the EFL

Mainly though, the result came down to making the most of the minimal clear cut chances that the game provided.

For all their attacking prowess, Halifax didn’t really make Grant Smith pull off anything more than a routine save.

He caught a long ranger from left back Jack Senior, parried away a stinger or two from elsewhere…but they got one sniff inside the six yard box and took it.

Yeovil can only really say they worried home keeper Sam Johnson once or twice a Josh Neufville pinger off the bar and a couple half chances from set pieces.

Speaking of Josh Neufville, let me get this down on paper (well, in pixels on a screen)… when he’s playing Premier League football in a few years time we will all say “we saw it first”, “he learnt it all with us”... he’s that good.

He seems to find space where others can’t, he seems to make over hit nothing balls into something and with a burst of pace, half a yard and a drop of the shoulder he can cause all kinds of trouble.

He’s going the same way as Andros Townsend and I’m just grateful we were part of that journey.

Halifax will probably get promoted.

I think it’s time to crack out the crystal ball, Stockport are doing their darnedest to throw the title away and Wrexham are ready to pounce.

But if the Shaymen finish second or third, none of the other sides will fancy a play-off semi-final in West Yorkshire. They’re too good at home.

Then, they’ve got the big name players going forward to make enough chances in the final too.

All the more of a compliment to how we’ve troubled them (and plenty of others in the mix) over the course of 180 minutes.

Finally, a personal one. But National League sides need to better equip their press facilities.

Anyone who has ever had the pleasure of the John Lukins Press Box at Huish Park will appreciate what having a bit of space, room to sit/stand and having the freedom to get into a good flow.

There were five bodies from the YTFC side at Halfiax, Sam, two from Three Valleys Radio and Sheridan and I from the BBC.

With fans sat behind us, infront and to the side of us you’re crammed into about 2 meters of space. My knees are in bits.

You get more leg room in RyanAir economy.

It was the same at Solihull too, fairly new stands and the press area feels like an afterthought.

I’m not going to moan about the stuff on the pitch cos we fought as I knew we would… so I found a moan off the pitch instead!