Yeovil Town recorded their second away win in 72 hours and stretched their unbeaten run to seven with a 2-1 victory over Bromley on Tuesday, on co-commentary duty for the BBC was Marcus Duncomb who penned a few thoughts for us here at the Gloverscast… 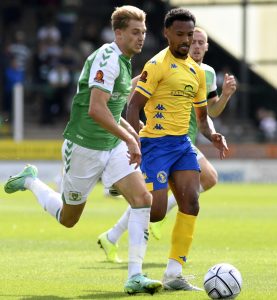 This Yeovil team is special. In terms of mentality and fight, they could not be further away from what we’ve had to get used to from Yeovil for the past eight or so years. In years gone by if we’ve taken the lead and then concede an equaliser it seems to have always led to a collapse – and that is unfortunately what Yeovil fans have grown to expect. But not this team. We conceded a soft penalty right before half time away at a team on an 11-match unbeaten run. Charlie Wakefield’s response? Instantly go down the other end bang one into the top corner against his former side. I can get behind that.

Darren Sarll said in pre-season that he was doing things differently this season. The manager said that he had been focussing on making sure they had a solid defensive base before anything else. I think it’s clear to see that this coaching has been effective. The whole team looks so structured and everyone knows their role defensively. Even when Sarll changed things up for the final 20 minutes as he subbed Morgan Williams on, it did not disrupt the team’s cohesion and understanding. It’s not just the structure of the defending which is promising, but it’s also their attitude towards it. These players will do anything to make sure that ball doesn’t end up in the back of the net.

Adi Yussuf was so good at what he needed to do yesterday. Coatesie mentioned in his Dagenham conclusions that Yussuf is a back to goal striker and he did exactly that against Bromley. It was not an easy job for him. The whole Yeovil team spent much of the second half in and around their own penalty box with Yussuf being the only one staying on the halfway line. Every time Yeovil cleared it, Yussuf would somehow find a way to get onto the ball and keep it for as long as he could. The Bromley fans around me were getting frustrated with how often Yussuf was winning headers and keeping the ball for Yeovil which says it all.

As the players were celebrating jubilantly with the fans at the end (and I wished I was there and not in the press box…) a bitter Bromley fan saw my Yeovil scarf and said to me “Does this win mean a lot to you then? It’s like a cup final celebration!”. I explained to him that we celebrate every win like this and that it doesn’t matter who we’ve beaten. Where would the fun be if after winning a game there was a quick round of applause and then everyone popped home? We’re not going to win every game (sorry), so enjoy these moments and remember them when things aren’t going as well. This squad is down to its bare bones – just look at yesterday’s bench – and is performing ridiculously well considering.

Can we play at Hayes Lane every week? Since relegation from the EFL, Yeovil have enjoyed some great outings to Bromley. A Rhys Murphy 90+7th minute equaliser, a 120+2nd minute winner in the FA Cup, *finally* getting a first league win in December 2020 and now ending their 11-match unbeaten run through a thoroughly professional performance. I’m already looking forward to Luke Wilkinson’s 90+4th minute free kick winner in the FA Trophy semi-final at Hayes Lane in April…