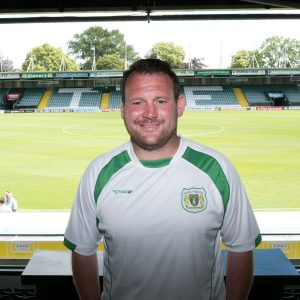 As Darren Sarll departs Huish Park to take up the First Team Manager’s job at Woking, we’ve crunched some numbers of his time at Yeovil.

His appointment on June 19th 2019, just a month before the season started, ushered in a new era following relegation from the Football League

The early ending of the 2019/20 season prevented this from being higher, obviously, and doesn’t include any FA Cup, FA Trophy, Somerset Premier Cup games or the play-off fixture against Barnet.

45 – The number of league victories, during his tenure

Which is broken down into; 45 wins, 25 draws and 44 defeats. This is the highest win percentage of a league manager since Gary Johnson’s first stint in charge.

It also means that for the first time since Steve Thompson’s reign after the departure of Gary Johnson in 2005, a permanent Glovers manager has a record including a positive league goal difference (+5, 148 goals conceded)

5 – Number of wins masterminded over Woking

There are far more moments we could look at beyond the stats and maybe we will over the next few days, but purely from a statistical point of view, the numbers add up to a very good spell as Yeovil Town manager.