Caretaker manager Charlie Lee has left Yeovil Town with a new manager set to be installed at Huish Park next week.

The club confirmed on Friday that Lee would “not continue as part of the coaching staff” under the new boss. 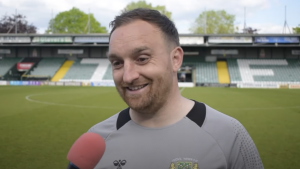 We assume the absence of Lee’s assistant, Jody Brown, from the statement means his time with the club is also over.

In a statement issued at 12pm, the club said: “Yeovil Town can confirm the departure of Charlie Lee as our interim manager with immediate effect.

“Charlie departs following the appointment of a new manager and his decision to not continue as part of our coaching staff.

“All at Yeovil Town would like to thank Charlie for his efforts and commitment during his spell as both assistant manager and interim manager.

“The new manager will be announced next week with a press conference to follow.

The departure ends Lee’s second spell at the club which began in February when he came in as assistant to then-boss Darren Sarll, following the departure of club legend Terry Skiverton.

When Sarll exited to join Woking at the end of March, Lee stepped in to the hot seat supported initially by Staunton and then Brown who joined at the end of last month.

Charlie’s final match was Tuesday night’s Somerset Premier Cup final win over Bath City and has a National League record of W1, D5, L2 in his eight matches in charge.

From us here at the Gloverscast, we wish Charlie all the best in whatever comes next and thank him for his service to our club as a player, coach and manager.