Begovic and Moore in Championship Teams Of The Season

Firstly, congratulations to Asmir Begovic who has been named in the official EFL Championship team of the season, the former Glovers Loanee has been brilliant for Bournemouth in a season which will see them take on the play-offs as they search to join Watford and Norwich in the Premier League next season. 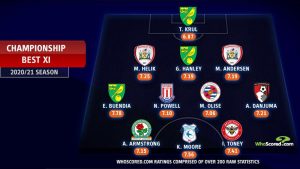 Secondly, the team over at WhoScored.com have also published their best XI, this one includes former Yeovil front man Kieffer Moore, now of Cardiff City.

It’s unsurprising that both of these sides are made up heavily of Norwich players, but only one Watford player is represented across both teams.

Moore scored 20 goals this season and won more aerial duals than anyone else in the division (440), he also landed no fewer than 12 Man Of The Match titles, via the WhoScored.com rating system.

Congratulations to both Asmir and Kieffer for their successful campaigns and best of luck to Asmir and the Cherries in the Play-Offs.