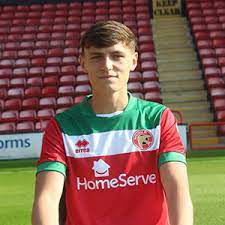 Yeovil Town have announced the signing of Sam Perry from Walsall until the end of the upcoming season.

The 20-year-old midfielder, who came through Aston Villa’s academy, has joined from the League Two side and becomes the first loan signing of the season.

He will go straight in to tonight’s opening pre-season friendly at Taunton Town.

“He made 25 appearances at a League Two club last year and will add to the quality already in the building.”

Walsall manager Michael Flynn name-checked both Hargreaves and his assistant Chris Todd when speaking about the move.

He said: “It is a good move for Sam. It is a chance for him to play regular football and to continue his development at a club where I know it will be done right with the manager and assistant manger at Yeovil and I wish him all the best for the season.”

Both Todd and Flynn played for Newport County, albeit Todd left the South Wales club a couple of months before Flynn arrived, so there’s possible connection there.

The Walsall-born player joined the Villa academy as a youngster before returning to his hometown club in 2019 when Darrell Clarke was in charge, assisted by Marcus Stewart, now Head of Player Development at Huish Park – which is another possible connection.

He made his debut in an EFL Trophy tie in January 2020 before being offered professional terms by the Saddlers at the end of the 2019-20 season.

The following campaign he made 16 appearances in League Two, scoring once in a defeat at Bolton Wanderers, and he followed that up with a further 25 matches in all competitions last season.

He joins striker Malachi Linton and Ollie Hulbert and experienced full-back Jamie Reckord among the new arrivals to the club this summer.