Wakefield wants a Premier League team in Round Three 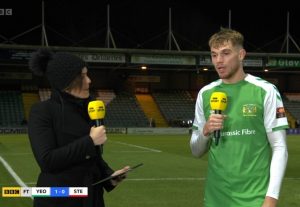 Yeovil Town goal-scoring hero Charlie Wakefield spoke to the BBC television team after his goal sent the Glovers into the Third Round of the FA Cup.

Ask who he’d like to face, in the next round, Charlie (like the rest of us) set his wishlist quite high!

Glancing over at pundits former Brighton manager Chris Hughton and ex-Seagulls’ striker Glenn Murray, he said: “Now we are in the draw, hopefully we can get someone like Brighton – that’s where I’m from – one of the big Prem teams and we will enjoy every moment.”

Wakefield is enjoying his finest form of his career, as well as his first elongated period as a first team regular this season, something the former Chelsea man thinks is paying dividends.

“I am getting a run of games, I am thankful to the gaffer (Darren Sarll) for giving me this opportunity and I managed to kick on.

“When you have a smile on your face you are going to play your best football and I am just delighted for the team.

“I have had my injuries and setbacks, but that is in the past and I am enjoying my football. This team are on a great run, we all have to keep level-headed and focus on the league and the next game.”

“We just take it a game at a time and we are all just enjoying it, everyone plays with a smile on our face and it is paying off.”

It was Wakefield’s fifth goal of the season which secured the Glovers’ place in the hat… (it’s a bowl, but whatever) a moment for the winger to savour.

He told Murray: “Scoring goals is what I should be doing in the position I am playing, so I am delighted.”

“There’s been a couple where I have not been that composed and the manager always says to me ‘just strike through the ball’.”

“Great play from Sonny (Blu-Lo Everton) so credit to the build up to put me in that position.”