Charlie Wakefield has returned to training and could be involved against Boreham Wood in this weekend’s final home match.

The forward has missed the past three matches through illness after being substituted in the Easter Monday draw at W*ymouth.

Speaking at his pre-match press conference on Thursday, Yeovil Town caretaker manager Charlie Lee said: “I think (Charlie) will be doing something light today (Thursday) and we have to be careful with someone who has been out for quite a while through illness.

“We don’t want him to come back and get another injury, but he’s back with the group and training, so we will see how he is and how he gets through it.”

The boss said a number of players had reported knocks following the goalless draw at home to Wealdstone last Monday, but he is hopeful most will be available for the visit of Boreham Wood.

He added: “We had about eight injuries on Monday, but none of them are serious. We might have to see how a couple react in the warm up for today’s training and see if they need an extra day, but there should be a good squad available.”

In their past two matches, this weekend’s opponents have won 2-0 at table-topping Stockport County and held second-placed Wrexham to a draw, so the Glovers’ boss is expecting a difficult contest.

Those two results followed a run of only one win in their previous 13 matches since they went out of the FA Cup at Premier League Everton at the start of March.

Lee said: “They did have a lull after the FA Cup exit and that took a lot out of them, but they have had a couple of good results and they are going to be a tough opponent.

“They know how to win games, so we had better be ready for them. They have not changed their team drastically throughout the season, they have the same spine.

“Luke (Garrard, the Wood manager) has done really well and it’s going to be a tough game, they are not going to come here and let us win for our last home game of the season.”

On the hunt for a permanent manager at Huish Park, the current caretaker incumbent said he knew exactly what he did a week ago when he did not rule himself out of the running for the job.

With chairman Scott Priestnall understood to be interviewing candidates from the “40 or 50 applications” he has received for the role, Lee said his focus was simply their remaining three matches starting with Boreham Wood at the weekend. 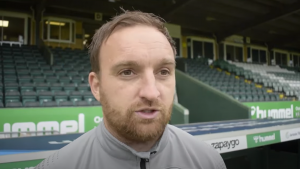 Asked whether he thought the uncertainty over their futures had left his players unable to raise themselves for fixtures, he said: “They are going to have a career of getting to the last game of the season and maybe not having a contract, that is not something that is rare.

“I think I had it in the last six years of my career, so you have to prepare for it and show you are willing to put
your body on the line to win games because that is what gets you a new contract at the club you are at, or gets you signed by another club.

“I always found it easy, I never once thought about an injury before a game and went in to every game trying to show how good I was and I stuck with that my whole career.

Asked about his ambitions to continue his managerial journey, whether for Yeovil Town or not, he added: “I have loved being coach, assistant and manager and it’s something I want to do in the future, but it doesn’t matter what I want, it’s what the team needs.

“What this team needs is for me to get them ready for the game this weekend.”