Top scorer Quigley back in training

Top scorer Joe Quigley is back in training with Yeovil Town as they head in to a busy festive fixture schedule.

The six-goal striker has not featured since picking up a knee injury in the 1-0 win at Dagenham & Redbridge a little over a month ago but returned to training this week. 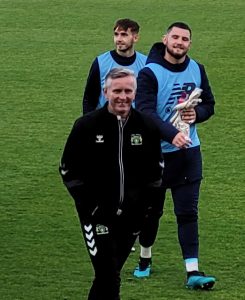 Assistant manager Terry Skiverton, who was deputising on media duties on Thursday in place of boss Darren Sarll who had a bereavement in the family, said the defender Mark Little was always “progressing well”   having returned after a long lay-off.

Speaking ahead of the Boxing Day trip to Torquay United, he said: “We have had a few back in training and it’s been good having Mark Little back on the training ground.

“Joe is doing little bits and pieces, Reuben is getting stronger with every game and training session, so it’s looking good.

He added: “The squad is getting stronger at the right time, so for us it is important we look to get results in these games.

“Recent results and performances means everyone wants to get in the team.”

Skivo was also asked about facing his old manager Gary Johnson twice over the Christmas period, the current situation with COVID-19 and off-the-pitch takeover rumours, here’s what the assistant had to say: