Still in 11th place despite no game 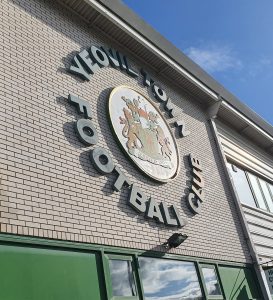 Yeovil Town remained in 11th place in the National League table despite the cancellation of their derby game with W*ymouth today.

Seven games did go ahead with Torquay United – our next opponents who also inflicted a 3-0 defeat on Darren Sarll’s men – losing 2-1 at Eastleigh with goals from former Glovers’ midfielder Tom Whelan and striker Tyrone Barnett.

The results leave us five points off the play-off places and 16 points off W*ymouth, who occupy the final relegation place.

In other fixtures, a late equaliser from, Jack Clarke, who had a brief unsuccessful spell with Yeovil at the start of the 2019-2020 season, saw Chesterfield draw 1-1 with second-placed FC Halifax Town.

Other ex-Glovers on the scoresheet today include Paddy Madden who struck a late winner for Stockport County at Solihull Moors and Angelo Balanta scored the only goal in Dagenham & Redbridge‘s win over Aldershot Town.