Staunton extends his stay with Glovers

Midfielder Josh Staunton has signed a new contract to stay at Huish Park for a further two years.

The 26-year-old, who was caretaker manager who the club’s final game of last season at Altrincham following the exit of former caretaker boss Charlie Lee, is the first player to commit his future to the club since the arrival of new boss Chris Hargreaves.

Staunton remains the only Yeovil Town manager in history to hold a 100% win record, but returns to his more regular spot on the pitch. 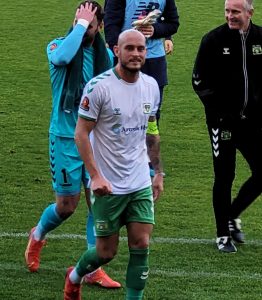 “I came here to start something, unfortunately we haven’t done it in the last two years, but I’m excited to continue being part of the journey.”

The Kent-born player added that he had always wanted to remain at the club describing Somerset as “a home away from home“, adding that he was now house-hunting with his girlfriend in the area.

He is among the players who have spoken to new boss Hargreaves this week and spoke positively about what he had heard, saying: “I like his drive and vision for the club and the way he wants to play football.

“It’s nice to have a fresh set of eyes because everything that has happened in the past we can leave in the past.

“I hope the fans get behind us as a team and Chris as a manager because it is a really exciting time to for the club.”

I’m delighted to extend my stay at the club. Hopefully a new and successful chapter for all of us and something I am pleased to be a part of. Thank you to all the fans, you really made this an easy decision for me, I believe in this club, we can make it great again! 🟢⚪️💚 @YTFC https://t.co/vbT1KRYVmt

Last season saw Staunton play just seven times before picking up a knee injury which ruled him out for most of the campaign which was rocked by the loss of club captain Lee Collins.

He admitted that this was one of the toughest times of his career, saying: “There’s been some real lows, probably some of the lowest of my career but with the support of the fans I have got through them.

“I’m hoping that is all behind me, the operation was a success and it will be nice to come in to a pre-season with no worries.

“As a group of fans, we have faced some real lows and we deserve a good period together and we have the platform to do that.”

Staunton has played in a number of roles, and has been captain in the absence of Luke Wilkinson and Mark Little.

Boss Hargreaves added: “I’m delighted that Josh has committed his future to the football club.

“Josh has established himself as a real leader during his spell here and shown great quality whilst on the pitch.

“I’m looking forward to working with him and send my congratulations to both him and his family.”

From all of us here at the Gloverscast – a huge congratulations to Staunts on committing his future, we can’t wait to see you in a green and white shirt again.